Not a single tanker came into the city due to SSS protest. 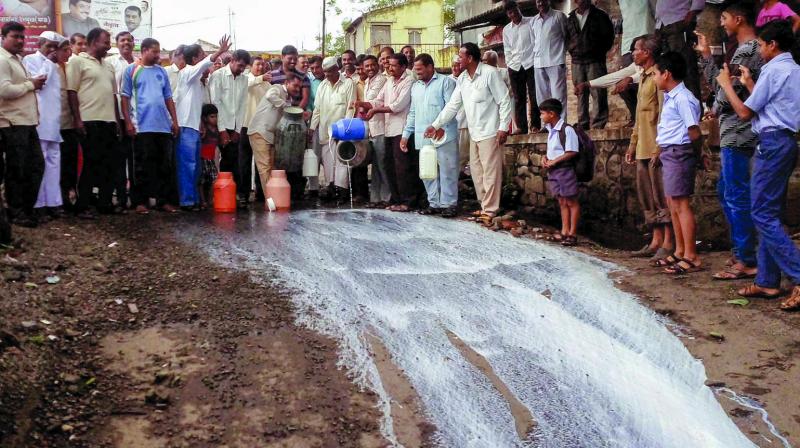 Farmers throw milk during an agitation at Kadegaon Village in Sangli. (Photo: PTI)

MUMBAI: Western Railway (WR) changed its plan of bringing in a milk tanker after getting a tip off about a possible agitation at Dahanu station. The Saurashtra Express which carries two milk tankers from Gujarat to Maharashtra everyday did not arrive, said a senior official.

The WR on Tuesday had announced that special arrangements were made to ensure uninterrupted supply of milk to Mumbai. It was said that a milk tanker will be attached to the Ahmedabad-Mumbai Central passenger train. However, not a single tanker came into the city due to the Swabhimani Shetkari Sanghtana’s (SSS) led state-wide agitation seeking a five per cent hike in milk-procurement rates.

According to a senior official of the WR, milk tankers will be attached with trains and brought to the city in the intervening night of Wednesday and Thursday.

Officials claimed that Saurashtra Express which generally carries two tankers of milk from Anand to Mumbai Central everyday did not carry the same on Wednesday due to the  ongoing agitation. The tankers were detached at Surat station.

“We had received alerts from the government railway police and railway protection force that the agitators will arrive on Dahanu station to block Ahmedabad Mumbai Central Passenger, which was expected to carry atleast two tankers from Anand station to Mumbai Central. Hence, the plan was changed, as we don’t want to waste milk,” said a senior officer.