The report was submitted on Saturday following which the action was taken. 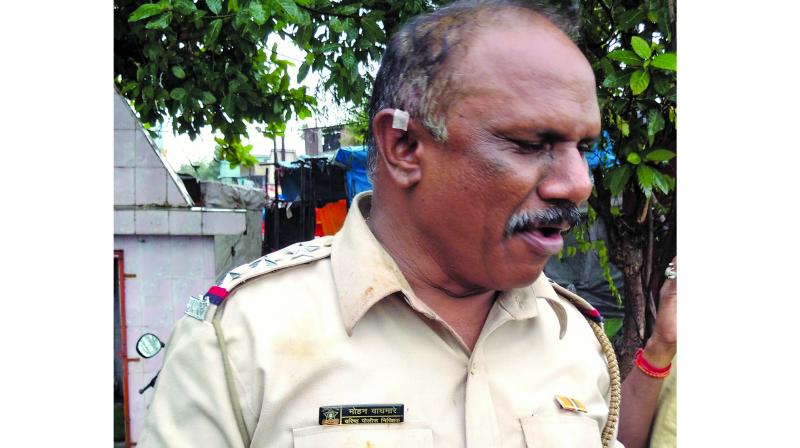 Mumbai: The Thane police has suspended two police officers, including the senior inspector of Hill Line police station, for alleged lapses in their handling of the rioting and arson by locals at Nevale village in Kalyan on June 22, in which cops sustained injuries and police vehicles were set on fire. The suspensions were ordered following an inquiry into the police handling of the rioting that erupted after the navy began building walls around its British-era airstrip. The report was submitted on Saturday following which the action was taken.

According to the probe, senior inspector Mohan Waghmare and assistant inspector Ravindra Kaurati, defaulted in handling the mobs from the Bhal, Khoni, Nevale, Rawal Pada villages. Instead of leading the cops, Waghmare vanished from the crime scene and was missing for at least three hours.  He sustained a minor injury to his right ear but the inquiry revealed it was superficial and did not call for his leaving the spot.

The preliminary inquiry was ordered by Thane city police commissioner Param Bir Singh and was conducted by additional commissioner of police Pratap Dighavkar. “The inquiry revealed the lapses on the part of two police officers, who have been suspended. They will now face a departmental inquiry following which, the final action against them will be decided upon,” said Sukhada Narkar, Thane City police spokeswomen.

Officials revealed that both officers were transferred immediately on June 23, following which the preliminary probe was ordered against them. The Asian Age had reported that during the mob violence, the rioters also molested two women constables.  Nevale sarpanch Chainu Jadhav and Mathur Mhatre, who were named in the FIR as the main accused in rioting case, also succeeded in hoodwinking the policemen for days.

On June 22, group of around 1500 villagers from Nevale assembled to conduct silent protests against the Indian Navy’s plan of taking over their farmland and building a fencing wall around it. The disputed land belongs to the armed forces since independence and the 7/12 document of the 17 acre plot is in the name of Navy.
However, the demonstrators resorted to violence and assaulted policemen and torched vehicles.