The authorities have claimed that all the complaints received were attended timely without much delay. 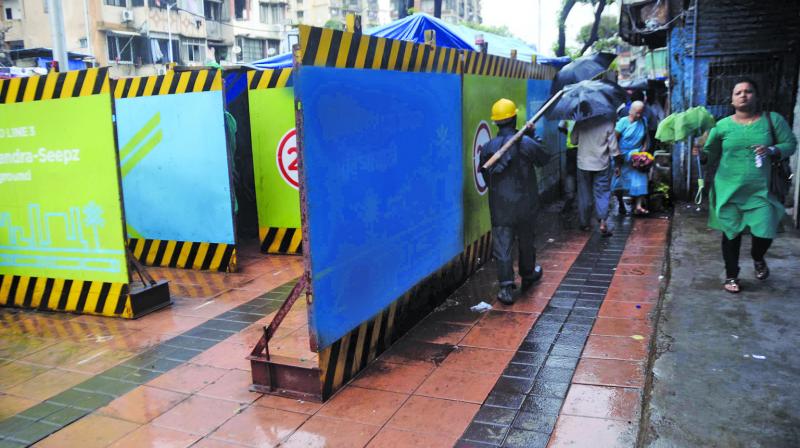 As the city’s footpaths continue to disappear, citizens are finding it difficult to step out. (Photo: Shripad Naik)

Mumbai: A 24X7 control room operated by Mumbai Metropolitan Regional Development Authority (MMRDA) and Mumbai Metro Rail Corporation Limited (MMRCL) has received 138 complaints from city residents and commuters since the onset of monsoon last month. These complaints were about a range of issues including the presence of potholes on the western and eastern expressways as well as the waterlogging in low-lying areas.

Most residents who called the control room complained of ‘sleepless nights’ thanks to the MMRCL’s ongoing work at its Metro-3 Colaba-SEEPZ underground corridor. According to the MMRDA officials, the agency had acted upon several complaints, especially pertaining to potholes, open drains and waterlogging, within 24 hours. Complaints that came within the jurisdiction of the BMC, for instance those pertaining to waterlogging at Sion Koliwada and Mahim, were referred to the civic body for redressal.

As per the records assessed by The Asian Age, both MMRDA and MMRCL have received 69 complaints each. Of these, six complaints were regarding the ongoing Metro construction works in the city.

The authorities have claimed that all the complaints received were attended timely without much delay. “When we receive a complaint, we make sure that it attended as soon as possible and direct it towards the concerned department. Suppose if the complaint is to be tackled by the BMC, then we direct it to the BMC’s concerned department,” said an official from MMRDA. Most complaints were from areas like Nariman Point, Mahim, Sion, Koliwada and Bandra.

The control-room was set up in 2006, a year after the 2005 Mumbai flooding, in a bid to address public grievances on a priority basis. “Compar-ing the amount of complaints received few years back, now the number of complaints have drastically reduced,” claimed the official.

Due to the ongoing Metro line-3 work at L.J road stretch at Mahim, wide footpaths have shrunk and the pedestrians are facing a harrowing time during the peak office hours. The path is so narrow that one cannot even walk with their umbrellas fully open. “During the evening hours, the office goers hardly ply the shrunken footpaths as too many people cannot access the footpath at a time and hence they rather opt for walking on the road,” said Prem Lal, a regular commuter from the area.