Faced ire from Sena, which is fielding leader’s son, for claiming legacy legacy. 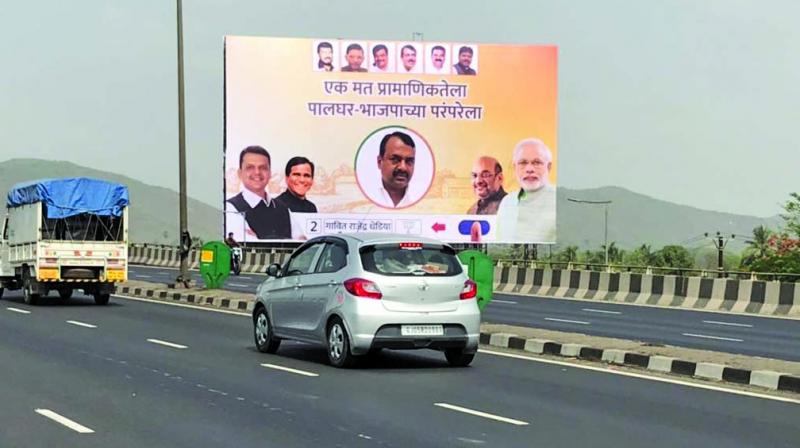 The BJP has understood Shiv Sena’s game plan to garner sympathy for its candidate.

Mumbai: The Bharatiya Janata Party (BJP) was forced to remove banners and hoardings carrying the photograph of its former representative late Chintaman Vanaga in the campaigning for the upcoming Palghar Lok Sabha byelection. The party’s move came in the wake of the Shiv Sena leadership slamming it for using Vanaga’s photo and trying to claim his legacy.

The Sena has given its ticket to Vanaga’s son Shrinivas for the bypoll and feels he has the right to claim the legacy. While the BJP has now removed Vanaga’s photographs, the Sena campaign continues to use them.

The Palghar byelection was necessitated by the demise of Vanaga, the incumbent MP. BJP has publicly appealed Sena not to contest the election as this seat was with BJP in 2014 and Vanaga was BJP’s MP. But Sena leadership didn’t listened. The Sena is also asking voters to vote for Vanaga’s son and
pay tribute to their beloved MP.

BJP has understood Sena’s game plan to garner sympathy for its candidate. So, while announcing ticket to Congress defector Rajendra Gavit, chief minister Devendra Fadnavis too has mentioned Vanaga’s name many times. “Vanaga had built BJP for 35 years in Palghar. So his party losing election just after his death will hurt Vanaga saheb. So, to pay him tribute, we will win this election come what may,” said Mr Fadnavis.

On this line, BJP has started using Vanaga’s photo in its campaign from the day one. It was an attempt to connect with the voters with sympathy. But Sena leaders raised question over using his photos on BJP posters. “The BJP denied ticket to Vanaga’s son. Still using his photo. This is not ethical,” said Sena leader Eknath Shinde during his public meetings. Looking at Sena going aggressive over Vanaga’s photo, BJP has redesigned its posters.

“Voters are well aware of the legacy of Vanaga. Few people misled his son. People have sympathy for him but they will vote for BJP. Though he is not there on posters but Vanaga saheb is in the hearts of BJP workers,” said Ravindra Chavan, a minister of state in the state government who is overseeing the BJP’s campaign.