The moment ICJ news broke out mediapersons thronged the locality. 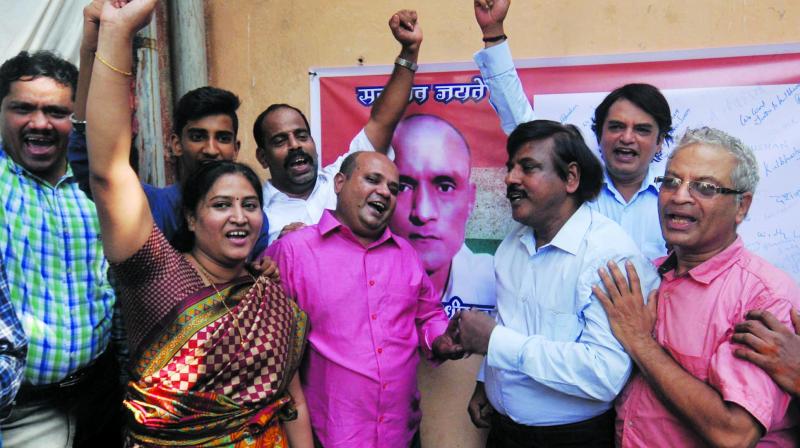 Friends of Kulbhushan Jadhav, who grew up in Parel, express relief after his reprieve. (Photo: Debasish Dey)

Mumbai: The moment International Court of Justice (ICJ) ordered Pakistan to halt Kulbhushan Jadhav’s death sentence, his friends and family members heaved a sigh of relief. However, they were quick to respond that they do not trust Pakistan and will have a big celebration only when Jadhav comes back home.

Jadhav’s uncle, Subhash Jadhav said, “We are really happy with decision. In fact, all Indians are happy. We are celebrating the decision but still we are afraid of Pakistan. We cannot trust them till Kulbhushan enters in India. We are now concerned about his life and nothing else. We have hopes that he will come back safely.”

Jadhav’s family used to stay on the fifth floor of Silver Oak apartment in Mumbai’s plush Powai area. However, the society’s watchman said that the family has moved out and the house is locked. The moment ICJ news broke out mediapersons thronged the locality. Around 50 local BJP workers also came and burst crackers outside Jadhav’s house. They shouted slogans of Bharat Mata ki Jai and Vande Mataram. “The international court has taken a good decision, we are very happy. He was an Indian and not a terrorist, so what Pakistan did was illegal,” said a BJP worker.

Jadhav had spent his early days in Lower Parel and used to stay in the police quarters with his family. His childhood friend Tulsidas Pawar said, “We haven’t slept since yesterday. But deep down we knew India would win this case. After the order, we broke into celebrationory mode. We bought sweets and busted crackers.”

Pawar and some other friends of Jadhav had organised a Ganesh puja for a favourable court verdict. Jadhav’s friends in the Prithvi Nandan Society in Lower Parel, where the former Navy officer grew up, performed the puja on Thursday morning. The group had also undertaken a signature campaign in a bid to put pressure on Pakistan to secure their friend’s release.

However, Jadhav’s family has reason to be scared, as Sarabjeet Singh’s case is an ideal example of Pakistan’s dual talks and treatment towards Indians in Pakistani jails. Singh was tried and sentenced by the Supreme Court of Pakistan for being a part of a series of bomb blasts in Lahore and Faisalabad in the year 1990. Singh died on May 2, 2013. As per the reports, Singh was attacked by his cell inmates at Lahore Central Jail. Family and friends of Jadhav have welcomed the ICJ decision. Earlier Pakistan’s military court had sentenced death penalty to Jadhav after finding him ‘guilty’ of espionage. Pakistan’s field general court martial had last month awarded death penalty to Jadhav. Pakistan claims Jadhav was arrested on March 3, 2016 from a place near Iran border.