The incident comes in the backdrop of a Pakistan army court awarding the death sentence to ex-Indian Naval officer Kulbhushan Jadhav. 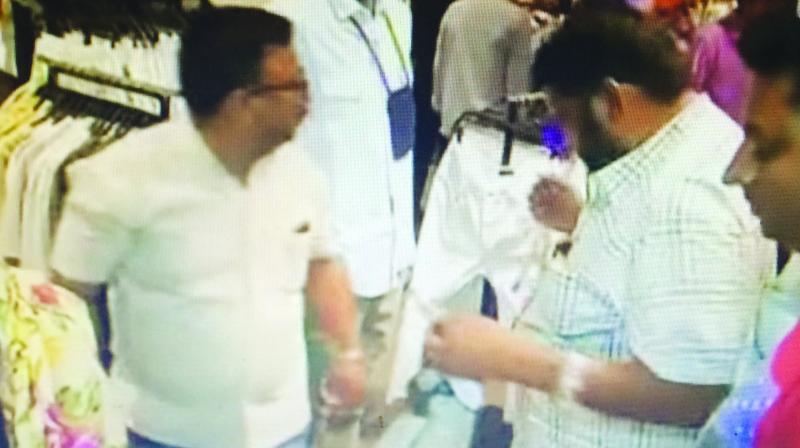 A video grab of MNS men trampling clothes at ZARA.

Mumbai: Around 20 Maharashtra Navnirman Sena (MNS) activists allegedly stormed clothing brand ZARA’s showroom at Phoenix MarketCity in Lower Parel on Tuesday afternoon, asking its staff to stop selling ‘Pakistani products’. Raising slogans, the MNS workers, pulled down clothes and trampled upon them. The MNS workers’ contention was that the showroom sells Pakistani clothes and accessories. The incident comes in the backdrop of a Pakistan army court awarding the death sentence to ex-Indian Naval officer Kulbhushan Jadhav.

Deputy commissioner of police Pravin Padwal said, “Ten protesters, including corporator Datta Narvankar has been arrested under IPC section 143 (unlawful assembly) in front of a ZARA showroom. The accused have got bail after the arrest. Further investigations are on.”

When the MNS workers came to the showroom, some policemen — who were already deployed outside — intervened and dispersed the protesters. The MNS workers had, on Monday night, visited the showroom and handed its staff a letter asking them to get rid of Pakistani clothes for sale.

After the incident, The Asian Age called the ZARA showroom twice, but no one from the store gave a statement about the incident.

The MNS letter, a copy of which is available with The Asian Age, reads: “Soldiers, policemen and innumerable citizens of the country are being maimed and killed regularly by Pakistan-sponsored terrorists, and the Marathi manoos in Mumbai has also not been spared by these terrorists…. Just yesterday, the Pakistan government awarded the death sentence to India’s soldier Kulbhushan Jadhav on false charges.” The letter read: “In spite of such atrocious behaviour, Pakistani-made clothes are being sold in India, which is alarming patriotic Indians… The money made by trade with India is being used by Pakistan to spread terror… In light of this, you are asked to immediately discontinue the sale of Pakistani-made clothes in your store.”

Meanwhile, vice-president of the MNS’ youth wing Akhil Chitre said, “We were following up on our demand against the sale of Pakistani-made clothes in ZARA shops. We have been sending them letters for the last two days, but they were still selling the products. So, we went there to remove all such products. They have assured us that they would not sell them again. If they continue to do so, we will launch an awareness programme on social media, telling the youth not to buy ZARA’s wares. If ZARA still does not listen, we will carry out an MNS-style agitation.”