Ajit Navale has been instrumental in organising the farmers' agitation for over a year and half in Maharashtra. 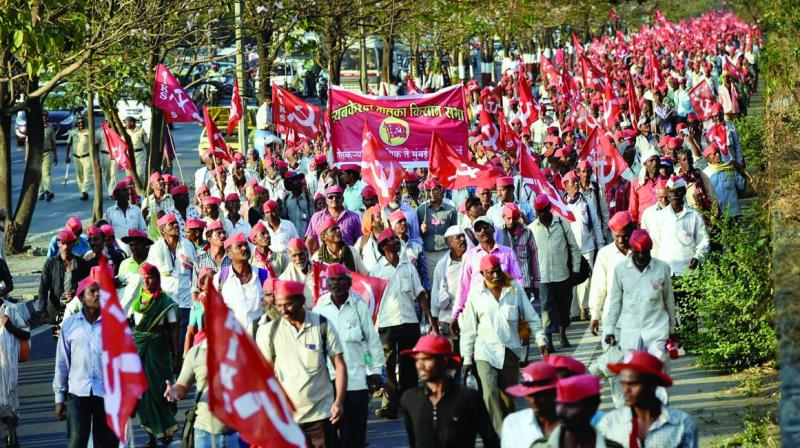 To avoid chaos, protesting farmers were told by their leaders that if they follow discipline and march there is no power that will dare to ignore their issues.

Mumbai: The framers’ show of strength in Mumbai this month forced the BJP-led Maharashtra government to accept their “100 per cent demands”. It was the culmination of an year-long agitation by farmers who had gone on strike in 2017 — a development  happening for the first time in Independent India.

Even though the Mumbai stir had been organised by the Communist Party of India CPI(M), which has limited influence in the state, such was the impact of the march, that by the end of it, every political leader visited the agitating farmers and declared their support for them.

There were several people who played an important role in making the march a success. However, the two who were instrumental in its organisation, sustainability and impact are, Dr Ajit Navale, 40, an Ayurveda practitioner and the state general secretary of the All India Kisan Sabha, which is affiliated to the CPI(M), and Jiva Pandu Gavit, a seven-time CPI(M) MLA.

Dr Navale has been instrumental in organising the farmers' agitation for over a year and half in Maharashtra. First, he organised a strike by farmers of Maharashtra on June 1, 2017, the first time in Independent India that farmers had decided to go on strike. Maharashtra chief minister Devendra Fadnavis decided to meet the farmers’ leaders. The meeting took place at his government residence on the night of June 3 last year. The chief minister met a few of the farmers and then declared the end of the strike.

But Dr Navale was the one leader, who kept opposing Mr Fadnavis’s proposal and came out of meeting shouting slogans against him. The next day the government was expecting the farmers to have calmed down, but Dr Navale’s appeal made the agitation stronger, which put tremendous pressure on the state government to give in. The farmers’ loan waiver was declared under this pressure and Dr Navale’s leadership came into focus.

Speaking about the success of the farmers' strike last year and long march this year, Dr Navale said, “I would like to make it clear that the credit for farmers’ strike is not entirely mine. Rather, I was just a small part of it. So the grand success that the strike has delivered shall not be credited to me but to farmers of Puntambe village as well as core committee of farmers’ strike. The long march was organised by the All India Kisan Sabha. The idea of a long march belonged to MLA Jiva Gavit and his son. Farmers supported us and media too gave wide publicity. We are thankful for it.”    Dr Navale believes that no government can afford to ignore farmers if they come together for their rightful demands. “Kisan Sabha is not a new organisation. Ours is the third generation working for farmers’ issues. But the long march was a success because of the participation by the farmers. They are the real heroes. What we did is just give them confidence to stand for their own rights. The real credit goes to farmers only,” he said.

MLA Gavit, 64, also echoed Dr Navale. He admitted that there was a risk that the intensity of the long march would fizzle out over seven days, but it did not happen because of the determination showed by  farmers. “We convinced them this is our karenge ya marenge (do or die) moment. We had organised a similar protest in Suragana a few years back, where we gheraoed the tehsil office. So, the people had some idea about it. This time, we only had to implement it on a larger scale,” the MLA said.

Mr Gavit has represented the Kalwan Assembly constituency of Nasik on seven occasions. In fact, he is the only Left member in the Assembly. He began his career as an activist for farmers and tribal rights. Coming from the tribal belt, Mr Gavit was a member of the Kisan Sabha as a young man. When he began his career in the late 1970s, his district Nasik and two adjoining districts of Ahmednagar and Thane were Communist strongholds. The tribal belt of Thane, Nasik and Ahmednagar’s Akole Assembly constituency was a Left bastion. In the last 35 years, the CPM has lost its influence in all other parts, but Mr Gavit has not lost his control on his constituency.

Outlining the achievements of the long march, Dr Navale pointed out that the state’s assurance that farmers’ land will not be acquired for the river-linking project of the Pinjal river unless it is absolutely necessary. “This is very important. Now once this project gets implemented, these farmers’ income will also rise. At the same time, the state will get more water. There will be huge benefits for north Maharashtra,” he said.

It is interesting to note that the Left parties, which are usually reluctant to allow other parties to use their platform, were quite flexible during the Mumbai siege as leaders from the Congress, the NCP, the MNS and the Shiv Sena, among others, shared the dais and also delivered speeches.

Explaining this shift in strategy, Mr Gavit said,       “When you want to win such a big battle, you need as many friends as possible. Not just political parties, there were thousands of common people, in Mumbai and Thane also, who came forward and helped us.  All those who supported the struggle of farmers came and gave speeches. There was no political speech by anyone. Everyone had sympathy for the real issues of farmers. So what we are seeing is beyond politics.”

He added, “From 1972 till date, we have been part of the movement for farmers and tribals rights. The forest land right is an old issue. Lakhs of cases are pending with the government and there is no substantial action by the government. So we decided to reach out to Mumbai and let the world know the genuine problems faced by farmers,” the MLA added.

So what is next? “The very next day after the chief minister’s assurances to fulfil our demands, we started doing a follow up of assurances. In six months, we will see to it that most of the cases of Forest Land Right get cleared. Once farmers receive their rightful land and once irrigation projects work starts in the area, we will be able to say that yes, we have won the battle,” Mr Gavit said.