LBS Marg to be shut for Metro-4 work

Brace for traffic jams as construction work starts in June 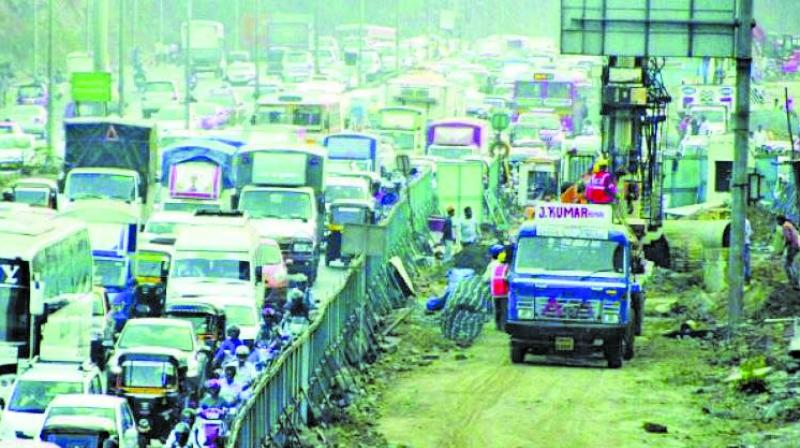 The LBS Marg will have nine meters wide barricading. The traffic will be diverted towards Express Eastern Highway.

Mumbai: Traffic at Lal Bahadur Shastri (LBS) Marg will be diverted to Eastern Express Highway (EEH) after the work of Metro-4 line (Wadala-Kasarwadavali) starts in June. From Shreyas Cinema at LBS Marg, the traffic will be diverted. The Metro will pass above the new Amar Mahal Flyover in Chembur which will be operational soon.

Public works department (PWD) officials had to reduce the height of the new flyover by two metres for the convenience of the Metro. The Mumbai Metropolitan Region Development Authority (MMRDA) has claimed that the construction of Metro-4 will be completed in 24 months.

“The LBS marg will have nine meters wide barricading, once the work starts, we are going to divert the traffic towards EEH, to ensure minimum inconvenience to the commuters. The civic body is already undertaking widening in the LBS marg which will be helpful when the metro construction begins,” said a MMRDA official. The alignment or route of line 4 will join the EEH from Teen Hath Naka, Thane.

Meanwhile, the Public Works Department (PWD) had to reduce the height of newly constructed Amar Mahal flyover to accommodate the metro corridor. “The original height of flyover was 8.5ft, this was brought down to 6ft so that the metro can pass above it smoothly,” said a senior PWD official.

Earlier in this month, contractors were appointed by the MMRDA to construct the 32.32 km long corridor. The consortium of M/s. Reliance Infrastructure Ltd. and M/s.ASTALDI and consortium of M/s TATA Project Limited and M/s China Harbour Engineering Co were appointed on March 4. “By April we may give the work orders because the bids have been revised after the government notification of reduced GST. Earlier there was 18 per cent GST, this has been reduced to 12 per cent,” added the official.