The blaze erupted around 12.45pm at Metropolitan located in phase 2 of MIDC area of Dombivali. 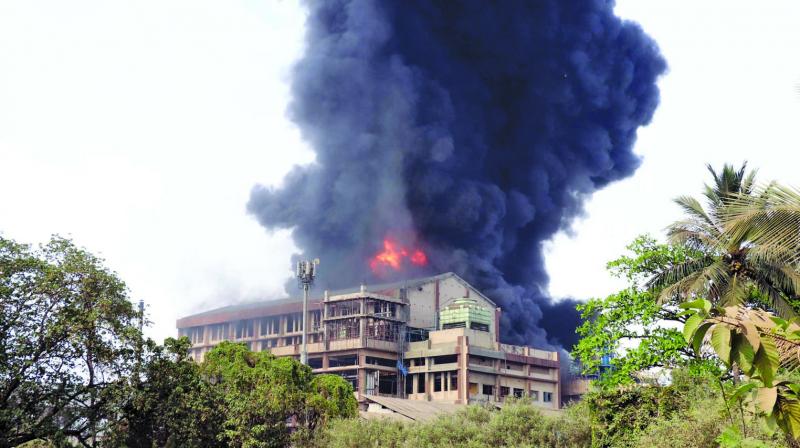 A fire broke out at a chemical company in the Maharashtra Industrial Development Corporation (MIDC) area of Dombivali Tuesday. (Photo: ASIAN AGE)

Mumbai: A fire broke out at a chemical company in the Maharashtra Industrial Development Corporation (MIDC) area of Dombivali Tuesday. No casualty was reported in the incident, an official said. Around 10 fire engines were rushed to the spot till the evening.

The blaze erupted around 12.45pm at Metropolitan located in phase 2 of MIDC. Multiple blasts were also reported within the company, which caused the fire to spread. Disaster management cell officials said that the cause of the fire has not yet been ascertained.

Due to the fire, thick smoke engulfed the area and residents within 500m of the spot were asked to stay away for some time. Regional Disaster Management Cell chief Santosh Kadam said, “Ten fire engines were rushed to the spot and efforts were still on to douse the flames till the evening. No one was injured in the fire.”

“The locals have been asked to evacuate as the fire spread across the neighbourhood. Some residents also complained of suffocation and irritation in the eyes,” said an official. The dousing operation went on for more than six hours but the fire had not been fully controlled at the time of going to press.

On February 13, a fire broke out at a commercial building in Mumbai’s Andheri East suburb. The building is located in the Rolta Technology Park in MIDC in Andheri East’s Marol area. At least 12 fire engines and 11 jumbo water tankers are engaged in extinguishing the inferno, the official said.