Modi also said that infrastructure projects worth Rs 10 lakh crore are already in progress in India. 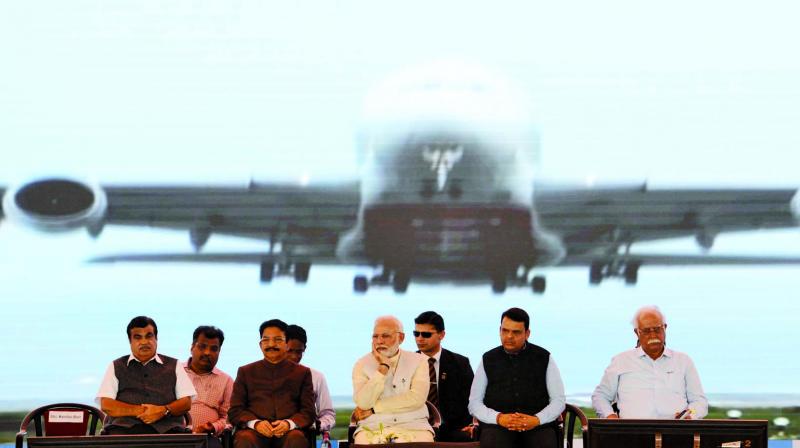 Mumbai: Claiming his government is working hard towards completing projects in a time-bound manner, Prime Minister Narendra Modi has said that the Navi Mumbai airport would be completed on time. “The earlier government had the habit of latakana, atakana and bhatakana, (to keep hanging, thwarting and misleading), but my government is committed to keeping its word,” said Mr Modi in Navi Mumbai on Sunday.

He was speaking after laying the foundation stone of Navi Mumbai International Airport and dedicating the Jawaharlal Nehru Port Trust’s (JNPT) 4th phase to the nation.

Taking a potshot at former Prime Minister Rajiv Gandhi, Mr Modi claimed, “A greenfield airport with such huge capacity is something completely new for India. Nothing of this sort has happened in 70 years in the state. We heard our PM talking about 21st century in the 1980s. But there was only talk. Nothing happened in the aviation sector. Had he done work in this sector, today we would not have faced such hardships.” The PM said the aviation sector has grown under his government.

“After 60 years, India has 450 private or government planes. But only last year, companies booked 900 planes. You can imagine the growth of the sector," said Mr Modi.

Mr Modi also claimed that he first came to learn about the Navi Mumbai airport project after the PRAGATI model for infrastructure projects was initiated. “This was first talked about in 1997 when the Atal Bihari Vajpayee government was in power. I keep holding PRAGATI meetings with Cabinet secretaries of all states. This is happening now,” said Mr Modi. He also said that infrastructure projects worth Rs 10 lakh crore are already in progress in India.

Talking about the fourth phase of JNPT, Mr Modi said, “This project has been completed within the deadline. This shows our commitment. If we want to rule the world market, we will have to improve our porting capacity. We have almost 5,000 kilometres coastline. The Sagar Mala project aims to explore possibilities in this sector.” The Prime Minister also spoke about his government’s ambitious plans to explore the possibility of 100 waterways in the country.

Praising the Maharashtra government and chief minister Devendra Fadnavis, Mr Modi said, “By 2022, you can imagine how the city and the region will be changed completely. There will be metro, Nhava Sheva Trans Harbour Link, Navi Mumbai airport and sea transport projects, and this will change the face of the city, which hasn’t happened in the last 40 years,” said Mr Modi.

Shivaji Statue
PM Modi also claimed that Shivaji's statue in Arabian Sea would be completed by 2022. His mentioning the project was the reply to the opposition's criticism over the delay of the project. PM Modi also saluted the Maratha emperor at the start of his speech. “Tomorrow is Shivaji’s birth anniversary. It is great moment for me to be in the district where Shivaji had his capital a day before his birth anniversary. He was a king who had realised the power of sea and that’s he built so many sea forts in this region,” said Mr Modi.