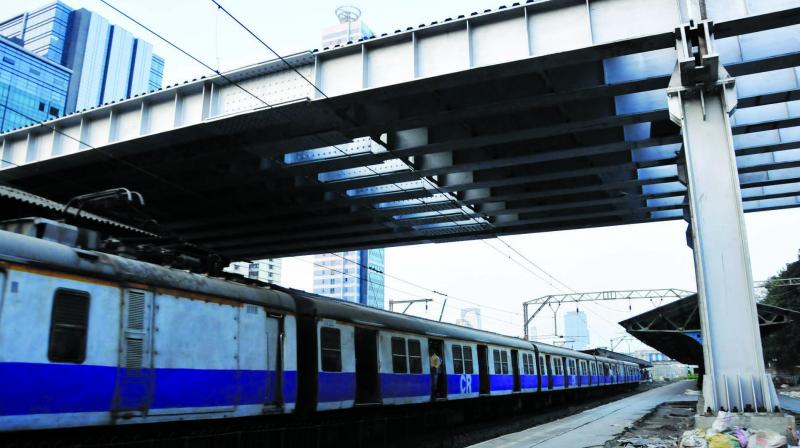 Mumbai: The Central Railway (CR) on Sunday installed nine girders for the new 16-metre wide foot-over- bridge (FOB) at Parel station. The CR observed a mega block between Kalyan and Thane stations on Sunday in order to complete the girder work launch of brand new Foot Over Bridge at Parel. The mega block was between 8.30am and 3.30 pm. The south-bound (Up) fast line was completely blocked. According to officials, Parel station records footfall of around 1.5 lakh commuters on a daily basis, while the Elphinstone Road station sees around 2 lakh commuters daily.

“The Parel power and traffic block for girder installation was completed successfully and normal services on Up and Down fast line started at 3.23 pm, well before the schedule time of the block, which was supposed to be till 4.30 pm. The construction organisation of CR did an excellent work,” said Sunil Udasi, chief PRO of CR. The girders were laid to the eastern end of the Parel station between platform number 3 and 4. The block was supposed to stay till eight hours, but the work got done fast. According to CR, the fast line services were diverted to Up slow lines between Matunga and Byculla stations during the block.

During the block, all Chhatrapati Shivaji Maharaj Terminus (CSMT)-bound express trains including Deccan Queen, Sewagram Express, Sahyadri Express, Panchwati express, Sinhagad express etc were diverted to Up slow corridors during the block and hence these trains were 15-20 minutes late.

The block was initially decided for the Kalyan-Thane Up slow line services, but it was cancelled on Sunday. Also, the mega block on the Harbour line was cancelled.

Earlier, this month, the army completed the work of 12-metre wide FOB at Elphinstone Road station. The army was called to construct the FOB after 23 people lost their lives in the stampede at the Elphinstone Road station FOB on September 29, 2017. The new FOB is 240-feet long and 12-metre wide. It is made of high carbonate steel. The FOB was installed to service the increasing number of commuters as the station serves commuters from both the CR and Western Railways.