The Bhima-Koregaon controversy returned to haunt Pune city on Thursday. 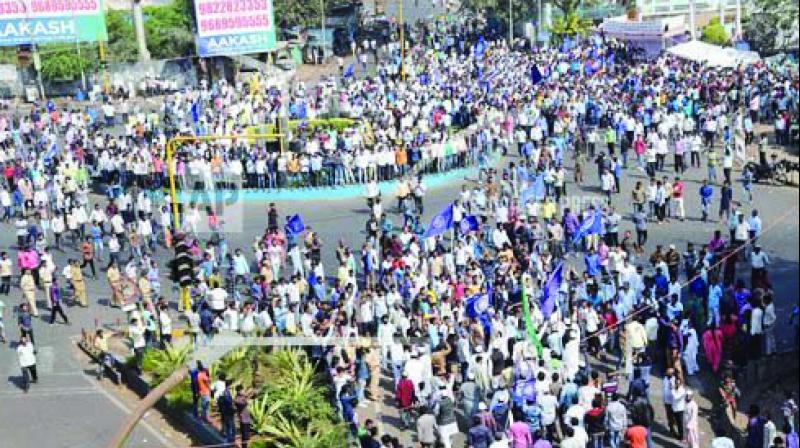 More than 100 people from more than 35 organisations held a demonstration.

Pune: The Bhima-Koregaon controversy returned to haunt Pune city on Thursday. More than 100 people from more than 35 organisations held an agitation in front of the Pune collector’s office, demanding the arrest of Sambhaji Bhide and Milind Ekbote for allegedly inciting riots at Bhima-Koregaon on January 1. During the strike which lasted from 11am to 4pm on Thursday, the participants demanded that police complaints against the organisers aka Elgar Parishad and the youth who participated in the bandh on January 3 be revoked.

M.N. Kambale, who led the strike, said, “Eighteen days are over since the riots took place in Bhima-Koregaon but the perpetrators of the riots Mr Bhide and Mr Ekbote have still not been arrested. Their crimes are non-bailable. Over 35 organisations, including many dalit organisations, have participated in this strike.”

Another organiser, Sagar Gorakhe of the Kabir Kala Manch, said, “The police has lodged complaints against more than 7,000 people across the state for participating in the bandh. These people have been accused of a grave crime. We want the state government to take back all such complaints, including complaints against dalits and Marathas. The state government should immediately stop combing operations started against dalit organisations.”

Mr Gorakhe further said, “The police has booked members of the Kabir Kala Manch and Republican Panthers for organising the Elgar Parishad on December 31, 2017, although there is nothing in common between the riots that occurred on January 1 at Bhima-Koregaon and the Elgar Parishad. The police has booked us on serious charges. We want it to take back these complaints. There is ample proof of right-wing leaders like Mr Bhide and Mr Ekbote inciting the riots. They should be arrested as soon as possible.”