Mamata however also cautioned the police that the local villagers must not be harmed or harassed. 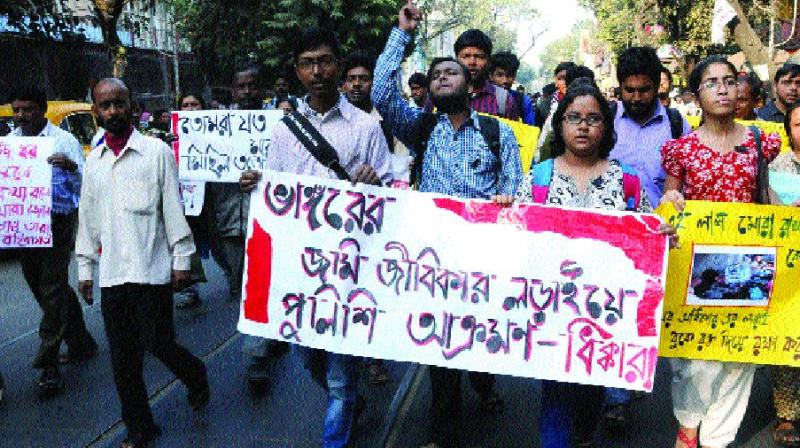 Students and activists take out a rally in Kolkata on Wednesday to condemn police firing on villagers protesting against land acquisition for a power project in Bhangar, West Bengal. (Photo: Abhijit Mukherjee)

Kolkata: A day after the mayhem at Bhangar in which two villagers were killed, chief minister Mamata Banerjee on Wednesday gave strict order to the police to identify the “outsiders” who had fomented violence by inciting local people against the power grid.

She however also cautioned the police that the local villagers must not be harmed or harassed. Bhangar remained tense but totally peaceful. Presence of logs and tree trunks on the roads to prevent the entry of police into the villages reflected serious public discontent. The police however was conspicuous by its absence at the scene.

Both the deceased villagers Mofizul Ali Khan and Alamgir Molla suffered bullet injuries. The former in abdomen while the latter in the neck and the spine.

Ms Banerjee who chaired a high-level meeting at Bhavani Bhavan, was briefed by the director general of police Surajit Kar Purkayastha. A detailed report from South 24 Parganas district magistrate P.B. Salim was also read out.

ADG (law and order) Anuj Sharma, city police commissioner Rajiv Kumar and senior officers of the CID were also present in the meeting. The reports which Ms Banerjee received from Ground Zero made it clear that the police had not opened fire. She told the police to find out who had.

Ms Banerjee acknowledged that the police had shown utmost restraint on Tuesday. “It is 40-50 outsiders who instigated the local villagers. Identify them and take strong action against them. But at the same time, ensure that no innocent villager is harmed,” she said.

Police has received evidence of the presence in Bhangar of some Maoists and ultra-Left students from universities and colleges in Kolkata. A CPI-ML (Red Star) leader accepted that members of his organisation were helping the farmers of Bhangar in their agitation against the power grid.

“Since we do not live there, there is no problem if the police and leaders are calling us outsiders. But that does not mean we cannot help the villagers,” he said.

Mr Roy also emphatically said that there was no police firing in Bhangar on Tuesday. Villagers however remained angry with ruling party leaders particularly local MLA Abdur Rezzak Mollah. They repeated their demand that the chief minister should visit Bhangar and personally announce that the controversial power grid would be relocated.

Adding a new twist in the Bhangar tale, Mr Mollah claimed that the owner of a luxury spa resort had masterminded the violent protest. “He is planning to develop a large realty project on 700 bighas of land in the area. Fearing that power grid may spell doom for this lucrative project, he not only instigated the villagers but also funded their movement,” he alleged.