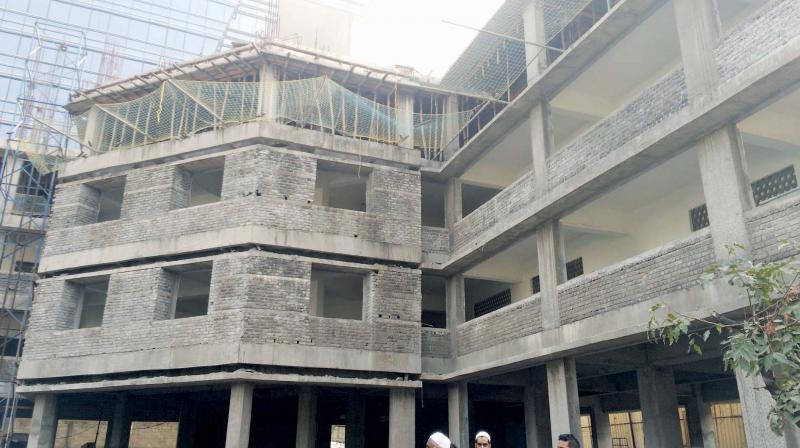 The school building under construction.

Mumbai: More than 900 students in Bandra’s Bharat Nagar are studying in a congested space in a transit camp, as the new Brihanmumbai Municipal Corporation (BMC) school, proposed for these students is stuck due to administrative issues. These students belong to the three civic schools, which were shifted to a transit camp in 2011, when the old building housing their schools was declared dilapidated in 2010. They are still awaiting the new building to be ready for use. The proposed school is supposed to be a five-storey structure but till now, only a three-storey structure has been constructed.

The Mumbai Metropolitan Region Development Authority (MMRDA) is the planning authority for the school, and so the BMC has to pay a premium amount, which the civic body hasn’t paid yet, resulting in the construction work being stalled for nine months. “The construction of additional floors is possible only if the civic body pays the premium to the MMRDA for additional FSI (Floor Space Index). Now, we are requesting the authority to allow the construction without charging the premium. BMC commissioner Ajoy Mehta has even sent a letter to Metropolitan commissioner regarding this issue,” said a civic official from BMC’s School Infrastructure Cell (SIC).  An official from MMRDA revealed that the case has been transferred to the Urban Development Department (UDD) who will further decide on the matter.

“The construction was supposed to be completed by February 2018, however, I couldn’t progress with the work as I didn’t get the commencement certificate (CC),” said the contractor in-charge for the construction. Tthe three schools in the case are civic-run Urdu medium schools — BKC School No. 1, Bharat Nagar School No. 2 and 3.