Experts applaud BMC, but point out water quality is not same everywhere. 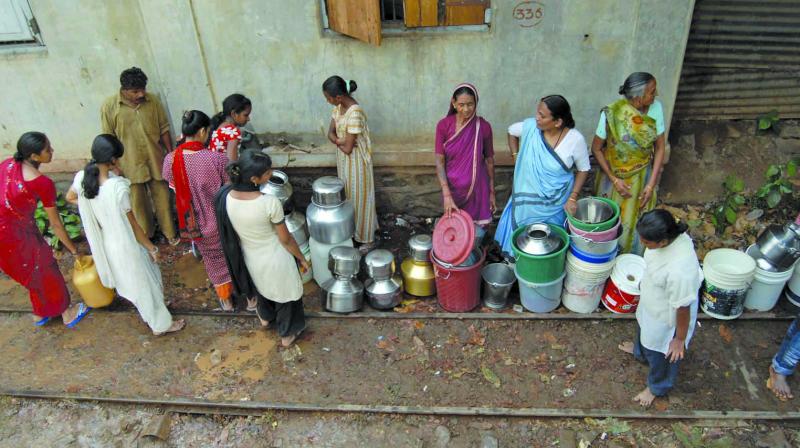 A study by Union consumer affairs ministry found that the tap water in Mumbai, provided by Brihanmumbai Municipal Corporation (BMC), is of the best quality among other metropolitan cities.

Mumbai: A study by Union consumer affairs ministry found that the tap water in Mumbai, provided by Brihanmumbai Municipal Corporation (BMC), is of the best quality among other metropolitan cities. However, water activists stated that though the city receives good quality water, the locals of slums and gaothan areas are still facing water issues.

Activists highlighted th-at access to drinking water supplied by the civic body should be provided to all, in order to prevent the consumption of contaminated water through informal sources. They also said that separate space should be provided for pipelines so they do not go through gutters and storm water drains.

Convenor of Pani Haq Samiti Sitaram Shelar said that there is no comparative data for ascertaining whether there is an impro-vement in the tap water’s quality in Mumbai. “There is no alternative data to ascertain the quality of water. The present report shows that as compared to other cities, the quality of tap water is better in the city, which has been earlier claimed by the BMC too. Later, National Environ-mental Engineering Resea-rch Institute (NEERI) as a third party audited the water samples and found the same kind of result,” he said.

As per the BMC’s water quality report (April 2018 to January 2019), out of the total water samples collected, only 1.02 per cent was detected unfit for drinking. Also, the percentage of E. coli bacteria created by sewage that causes gastrointestinal diseases, detected was only 0.13 per cent.

“However, in some areas, mostly among slum pockets, the tap water still seems to be contaminated due to the outer source. The BMC has claimed that only five per cent areas in the city is experiencing this issue. The civic body should ensure that there is access to drinking water to everybody so that private or informal players do not come in contact with the main line,” Mr Shelar added.

Residents of H ward have been complaining that the tap water in their areas is contaminated and blamed the damaged pipelines for the same. Chintamani Hinde Danda from Khar Danda in western suburbs said that since past three years they have been provided contaminated water daily and the BMC has blamed age-old pipelines for the same. “Since last three years, we have been getting very low quality water. The supply starts at 5.45 pm every day and lasts till 9 pm. In the first 30 minutes, we get polluted water with extremely foul smell. At times, we have also found mud and rust in the water. After complaining to the BMC and our corporator, the pipelines were inspected by the concerned officials. However, given the huge area, the fault in pipeline has not been detected yet.”

Regular incidents of polluted water supply have been reported from Khar and Bandra areas. Another resident, Karen D’mello from Pali Mala Road in Bandra said that since last week, they have been receiving contaminated water. “We get water supply for only three to four hours daily and since last week, the quality has deteriorated. When informed our corporator about the same, some damaged part of a pipeline was fixed. However, now the water pressure is very low. Children and seniors are facing health issues due to the contaminated water.”

Mumbai-based activist Godfrey Pimenta said that his organisation has been receiving complaints of polluted drinking water from Santacruz, Kurla and Marol. “The report may not be 100 per cent true, as some areas continue to get contaminated water. This is due to the water pipelines passing through gutters and storm water drains. In case of any damage, the dirt enters the pipeline. It is important that a separate space should be dedicated for laying pipelines,” said Mr Pimenta, Trustee of Watchdog Foundation.