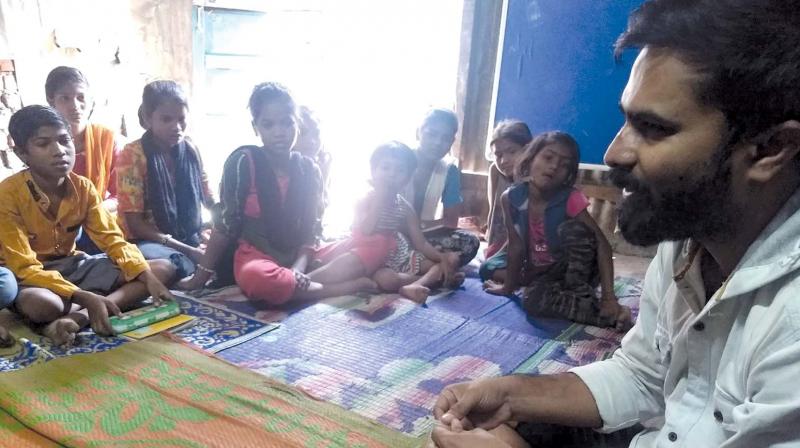 The session for viewing microorganisms was organised by Rafikh Shaikh, a Ph.D. student with TISS.

Mumbai: Young slum children in the M ward will now be able to view microorganisms using a foldscope, an ultra-affordable paper microscope. With this, students will be able to conduct experiments on their own, using water from their surroundings to view microorganisms which cannot be seen with the naked eye. The project is part of the Tata Institute of Social Sciences (TISS) “transforming M ward” which aims at generating knowledge and transforming human development conditions in the ward along with curating education among underprivileged children. The project also provides computer-based knowledge to students every Sunday at TISS study centres.

The session for viewing microorganisms was organised by Rafikh Shaikh, a Ph.D. student with TISS who has also completed his Masters in Microbiology from Nanded. According to him, the students were shocked to see living organisms in the fold-scope (see box) but were excited as they were seeing them for the first time. “These students had a rough idea about the term microorganism (which they must have learned as part of science) but had never seen one due to lack of devices in schools. When they first saw the microorganisms, they had so many questions and were confused about what just happened. Later, they were seen debating with one another about the presence of microorganisms in nearby water samples,” Mr Shaikh told this newspaper.

After the session, the students started experimenting on their own with drinking water, milk, curd etc. Apart from this, the students were also given hands-on training in computers where they were taught about the Internet, spreadsheets, graphics designing and editing etc.

Sabah Khan, coordinator, M ward, said, “The students here are first-generation learners and hence, need special assistance for everything. Through various parameters of the project, the aim is to make it more interesting for them. During the survey, we found out that M ward has the maximum school dropout rate due to ‘lack of interest’ and ‘financial troubles’. Financial troubles have been eradicated now as it is free however, currently, the team is trying to provide education in a fun way to attract more and more students and arouse their curiousity.”