The sellers are also claiming that notes bearing the signature of former RBI governor Raghuram Rajan are “rare and special”. 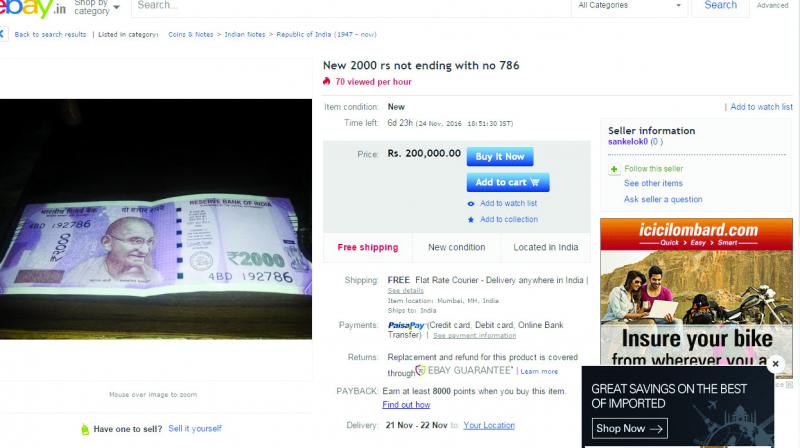 The sites were selling old and new notes for a higher price than their worth.

With the government banning Rs 500 and Rs 1,000 notes, many have found a way to get rid of their stashes at home — selling them on online resale sites. The Asian Age found as many as 430 listings for the search term ‘Rs 500’ on the popular e-commerce site eBay and even a listing for new Rs 2,000 note on OLX. Both the sites were selling the old and new currency notes for exorbitant prices such as Rs 15,000 for the new Rs 2,000 note and Rs 7,999 for ten notes of the old Rs 500 note.

One of the listings by a user named yashkankariya1996 was uploaded on November 17 at 10 am and is titled ‘Rs 500 Notes in sequence starting from 100 to 1000’ for Rs 7,999. The description of the post said, “Rs 500 Notes in sequence at starting...Very rare. Good price. Good in condition. Same Notes will be send as shown in photo. Customer will get 10 notes of Rs 500 each having series starting from 100 to 1000(sic).” The user says he is based in Beawar, Rajasthan. The post further adds that payment is only acceptable via debit and credit cards and the “product will be delivered by Nov 21-22 anywhere in India”.

US-based site eBay has listings for not just Rs 500 notes but also Rs 1,000 notes, and some are being sold under the heading “special number 786”. The sellers are also claiming that notes bearing the signature of former RBI governor Raghuram Rajan are “rare and special”. One user ‘hovertraxs’, based in Gujarat, is selling four notes — two Rs 1,000 and Rs 500 notes for Rs 7,299. Another user, ‘gagansaraf05’, termed a ‘top-rated seller’ by the site, is selling a single Rs 500 note “signed by Raghuram Rajan” for Rs 800. Most of the sellers have other listings where they sell Rs 10 notes or old coins.

While OLX did not have any listings for old notes, it had two users, shockingly, selling the new Rs 2,000 currency note. One of them, a user identified as Deepak based in Kowdialpet, Adoni, was selling the note with the last three digits ending in the digits 786 for Rs 15,000. While OLX deleted the said listing, the other one selling the new currency note for Rs 786 uploaded by user Ashok Parihar was still available. When contacted, joint commissioner of police Deven Bharti said that trading in currency notes was illegal. “With the old notes being banned and not in use anymore, no one can use them or sell them unless prescribed by the government. And trading in any currency notes — old and new — is illegal. We will take action after going through the listing,” he said. Responding to a query, the eBay spokesperson issued the following statement:  “As an independent online marketplace and an intermediary, eBay does not exercise control on what items are listed by independent sellers on the site. Sellers on eBay are registered users and are required to comply with applicable provisions of law when listing items for sale. While there have been no successful transaction for Rs 2,000 currency notes, we are disabling access to the notified listings per applicable provisions of law.”