8,000 MT of trash collected from beaches

The garbage thrown by the sea is not only from Mumbai’s creek but also Ulhasnagar and Thane. 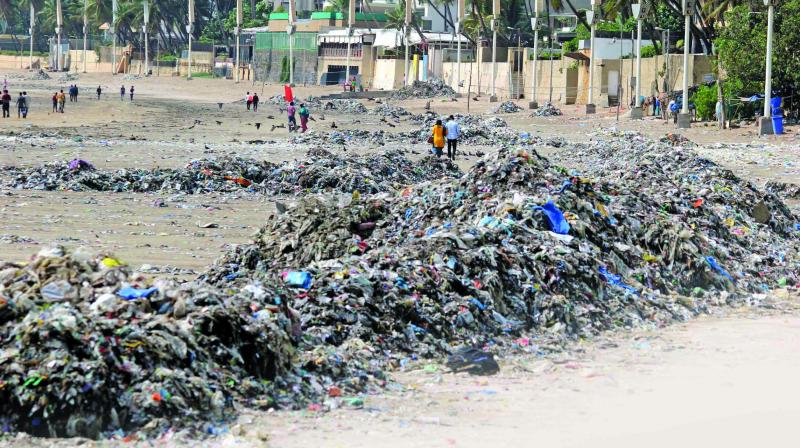 Despite numerous efforts by the civic body, the garbage problem at city beaches seems to be worsening with every passing day.

Mumbai: Despite numerous efforts by the civic body, the garbage problem at city beaches seems to be worsening with every passing day.

After continuous heavy showers, the Brihanmumbai Municipal Corporation (BMC) collected as much as 6,173 metric tonnes (MT) of waste from seven city beaches in the month of July. Whereas from August 1 to 12, around 2,373 metric tonnes of garbage has been collected.

Mumbai has seven seashores — Girgaum Chowpatty, Juhu Beach, Versova Beach, Dadar-Mahim Beach, Gorai Beach, Madh-Marve Beach and Chimbai-Wari-ngpada. During the monsoon, a huge amount of garbage is seen on these beaches  due to high tide and improper cleaning of nullahs.

“There has been no decrease in the quantity of garbage thrown up by the sea. This shows that the money spent on cleaning of rivers has been wasted. The BMC has failed to desilt nullahs properly this year too. Despite the ban on plastic and thermocol, the garbage washed up on the beaches contains 90 percent of plastic, polymer materials and thermocals only,” said Gopal Jhaveri, a river activist.

Similarly, from August 1 to 12, out of the seven beaches, Juhu Beach recorded maximum amount of trash (1,001 MT), followed by Dadar-Mahim Beach, Chimbai-Waringpada and Versova Beach with 493 MT, 363 MT and 336 MT respectively.

According to the reports, the BMC collected maximum amount of trash on August 7, 8, 9 and 10 when Mumbai received the highest rainfall of this season. “The garbage thrown by the sea is not only from Mumbai’s creek but also Ulhasnagar and Thane. Not just the BMC, even nearby municipal bodies are equally responsible for improper desilting and not curbing usage of polymer items,” said Mr Jhaveri.