The country’s first penguin was born in the Byculla zoo on Wednesday. 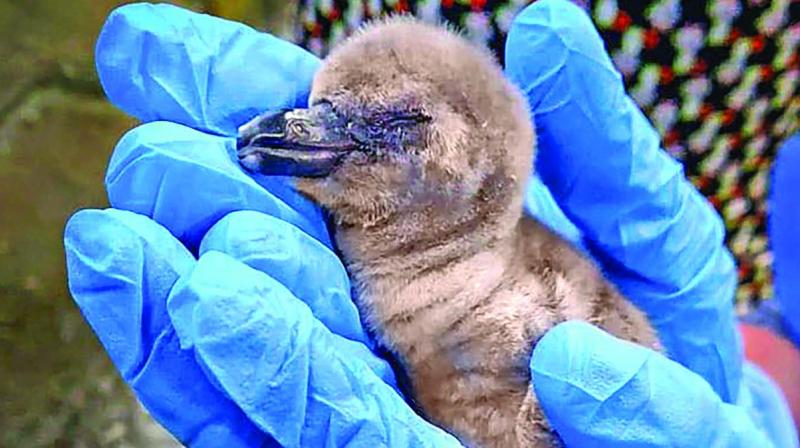 Mumbai: The health of the baby penguin born at Byculla zoo is improving, what with a slight increase in its weight. However, it will take a couple of days more for it to be able to stand and move on its feet, said civic officials.

For Byculla zoo, the night of Independence Day on Wednesday saw the birth of the country’s first penguin. The penguin was born to Flipper and Molt, the oldest and youngest, respectively, of the seven Humboldt penguins at Byculla zoo. “The baby penguin is doing very fine. Its weight has increased a bit. It is also responding well to its mother’s attempt to feed it,” said Dr Sanjay Tripathi, zoo director.

According to zoo officials, the baby is in the nest with both its mother and father taking care of its nutrition and brooding. Brooding is the process of incubation carried out simultaneously by the parents.

However, civic officials have not yet ascertained the gender of the baby penguin. The zoo authorities have decided to send samples to LeCones Laboratory at Bangalore for the DNA test. “It will take a couple of days more to send the samples,” said Dr Tripathi.

Ever since its birth, the baby penguin has become the talk of the town. Despite zoo officials having made it clear that the baby penguin will not be exhibited any time soon, around 6,000 people visited the zoo on Friday hoping to catch a glimpse of it, with nearly half of the visitors being children.

“There was tremendous excitement among the visitors about the baby penguin as they kept asking about its wellbeing,” said one of the officials.

People will have to wait another three months to catch a glimpse of the young one as it will not be exhibited before that time.