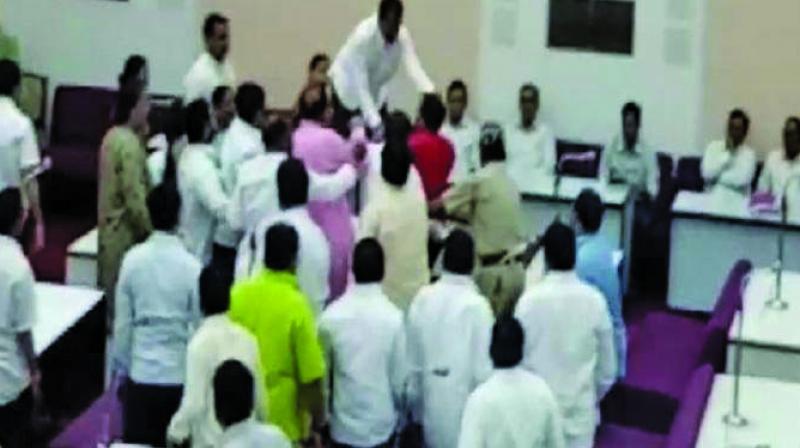 A video grab of BJP corporators assaulting Syed Matin in Aurangabad on Friday.

Mumbai: Bharatiya Janata Party (BJP) corporators of the Aurangabad Municipal Corporation allegedly assaulted All India Majlis-e-Ittehad-ul Muslimeen (AIMIM) corporator Syed Matin with shoes and slippers on Friday after he opposed the resolution paying tribute to former Prime Minister Atal Bihari Vajpayee, who passed away in Delhi on Thursday. Security guards rescued him and escorted him outside the civic house. BJP corporators have demanded that he be permanently suspended from the house.

The AIMIM clarified later that the corporator’s opposition to the resolution was not as per the party’s stand, and that the party will take appropriate action against him. The general body meeting of the corporation had been called on Friday
to discuss the project of a parallel pipeline.

However, due to the demise of the former PM, mayor Nandkumar Ghodele tabled the resolution for paying tribute to the former. It was opposed by Mr Matin, which irked BJP corporators.

Corporators Pramod Rathod, Raj Wankhede, Madhuri Advant and Rameshwar Bhadve rushed towards him and assaulted him. Ms Advant struck him with her footwear and other corporators followed suit till Matin fell down in the house and was rescued by other corporators and security guards.

When contacted, the AIMIM MLA from Aurangabad, Syed Imtiaz Jaleel, said, “Matin is always indulging in such kind of activities and it was not the stand of the party. We have reviewed the situation and sent a report to the party president, Asaduddin Owaisi. He will take action against corporator Matin.”

But he added, “Though Matin was wrong, but how did the BJP corporators behave in the house? That was also very bad. Corporators should not behave like this in the house. They should think about it also.”