Abducted 4-year-old from Mumbai is rescued in Bengal

The accused, who has been arrested, turned out to be the spurned lover of the child’s widowed mother. 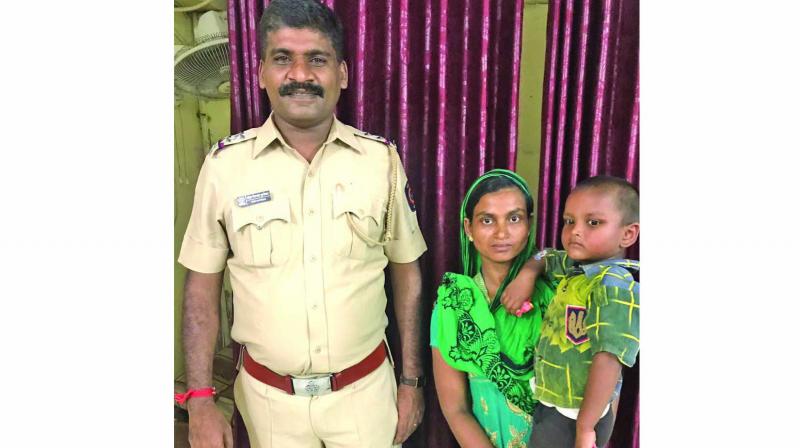 PSI Mahesh Kuchekar with the rescued toddler Azim Shaikh and his mother.

Mumbai: Less than a week after he was kidnapped from outside his tenement in Mira Road, the police rescued a four year-old boy from a remote village in West Bengal. The accused, who has been arrested, turned out to be the spurned lover of the child’s widowed mother.

According to the police, Azim Shaikh (4) had mysteriously disappeared while playing outside his tenement near the SVP School, Shivar garden on August 10, following which a missing person’s report was registered with the Mira Road police. Already on an overdrive to trace missing children and streamline security arrangements to eliminate such incidents, a police team led by PSI Mahesh Kuchekar and personnel- Vijay Brahmne, under the instructions of Senior PI Vasant Labdhe, swung into action and started investigations into the case.

It emerged that the child’s father had died two years ago, following which one of his colleagues, identified as Sameen Taj, alias Sikander Shaikh (32), started visiting their home and developed a liking for the widow, who works as a housemaid. Based on the information received, the police team were able to trace the name of the district, Purulia, in West Bengal, from where the suspect hails.

The police reached Purulia and with the help of their local counterparts managed to rescue the child and apprehend the accused from Kolagada village.

Investigations revealed that Shaikh had been pestering the child’s mother to marry him. But when she turned down his proposal, he retaliated by kidnapping her son so that he could force his bizarre ransom demand. The child was reunited with his mother on Wednesday, while the accused has been booked under section 363 of the IPC and remanded to custody.