Wednesday’s judgement was pronounced in favour of India with a 15:1 vote. 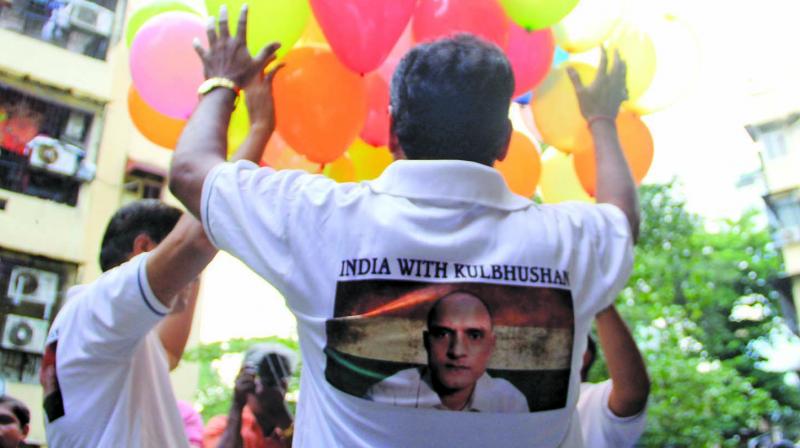 Friends of Kulbhushan Jadhav celebrate the verdict given by International Court of Justice (ICJ) on Wednesday. (Photo: ASIAN AGE)

Mumbai: The order by International Court of Justice (ICJ) in favour of India granting consular access to retired Indian Navy officer Kulbhushan Jadhav (50), who has been arrested on charges of espionage, set the mood for a celebration at his residence in Parel and native place in Satara. While Mr Jadhav’s childhood friends carried out a prayer ceremony for his early release, his immediate family chose to stay away from the media and the fanfare.

Mr Jadhav’s uncle Subhash Jadhav, a retired ACP, said, “We are overjoyed that the judgment was in our favour and we now await Kulbhushan's return to India.”

The locals said that they were expecting the ICJ to order his immediate release, however, the granting of consular access and the stay on capital punishment was a welcomed judgement. The locals released balloons, instead of busting crackers, to mark India’s legal victory. Wednesday’s judgement was pronounced in favour of India with a 15:1 vote.

Apart from his friends and family, Vijay Kanojia, owner of a laundry in Powai, fondly remembers Jadhav as “sir” and his wife as “mataji”. Mr Jadhav had financially supported Mr Kanojia and encouraged him to join the defence forces. He said, “I am really thankful to ICJ and just like Hamid Ansari was returned as a good gesture, we hope for our sir to arrive back soon.”

“We released balloons expecting Mr Jadhav to be released from Pakistan soon come back to India. We are hoping that Imran Khan would release Mr Jadhav as a goodwill gesture and strengthen his relations with India,” said one of Mr Jadhav’s relatives.

Many were seen wearing ‘Justice for Kulbhushan’ T-shirts in support of Mr Jadhav’s early release.

Tulsidas Pawar a friend of Mr Jadhav said, “ICJ has given us hopes of Kulbhushan’s return but we will believe only after he returns home safely.”