Trains were delayed and the impact of the abrupt halt was felt on the suburban stations of the central line. 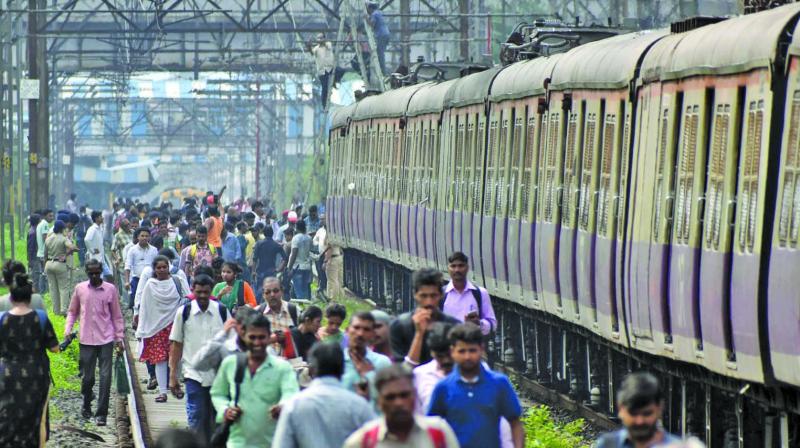 Commuters walk on railway tracks after the overhead wire broke down between Vitthalwadi and Kalyan railway station on Wednesday. (Photo: DEBASISH DEY)

Mumbai: Central Railway (CR) services were badly affected Wednesday morning due to  the breaking down of overhead equipment (OHE) which occurred around 8 am between Kalyan and Vitthalwadi stations on the Up line towards Chhatrapati Shivaji Maharaj Terminus. Two women were injured in the incident and were taken to the Kalyan Railway Hospital. Thousands of passengers were stranded in local trains and had to walk on the tracks.

Trains were delayed and the impact of the abrupt halt was felt on the suburban stations of the central line. Passengers between Kalyan and Karjat faced major problems as they were stranded in trains for hours.

The Central Railway ran shuttle services between Ambernath, Karjat and Khopoli, while long-distance passenger trains were given an additional halt at Dombivali and Thane to clear the extra suburban rush.

A Central Railway  spokesperson said that special services were also planned from Kalyan, Dombivali and Thane to clear the extra rush from these stations, and special buses were organised between Badlapur and Kalyan with the cooperation of civic authorities.

Vinaykumar Pandey, an employee of Tata Institute of Social Sciences, tweeted, “Today, I got a late mark and a half-day leave form was asked to be filled. This all because of @Central_Railway. Who is going to pay me my half-day payment. @PiyushGoyal, @narendramodi, @PMOIndia, @nitin_gadkari. It's very upsetting, when you are the only primary earner in your family.”

Another passenger Sanjay Bakshi tweeted, “Sir, this is a regular problem – not the one that took place today but trains are always running late on central. So please, do something to have a permanent solution. I am taking a local from Dombivali to CST.”