The police tracked him to his residence at Vikhroli and arrested him after he spilled the beans. 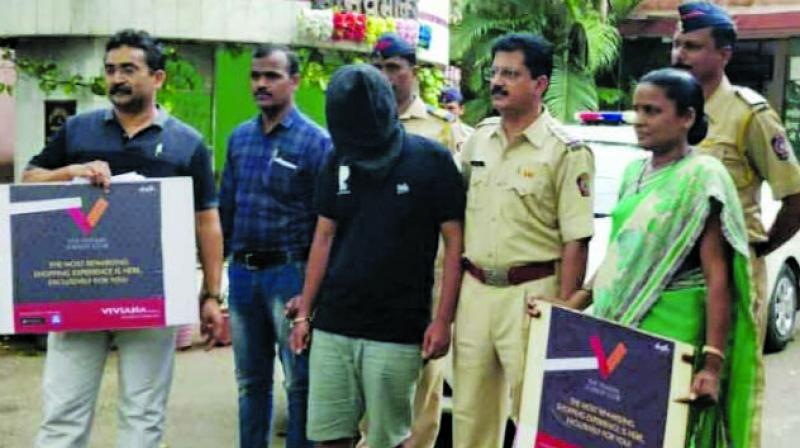 Mumbai: The Thane police has arrested a man for writing terror-related messages on pamphlets bearing the contact numbers of his ex-lover and her new boyfriend. The police tracked down the accused to Vikhroli and questioned him about his motive. Apparently, he had decided to make the pamphlets to trouble the couple.

The accused, identified as Ketan Ghodke, spurned by his former girlfriend, was upset about her new relationship and hence, decided to hassle the duo. Mr Ghodke allegedly wrote the message, “Gazva-e-Hind, Dadar Siddhivinayak boom, ISIS is coming… sleeper cell has been activated” on two promotional pamphlets of a mall.

Avinash Ambure, deputy commissioner of police, zone five, Thane, said, “The messages were written with sketch pen on pamphlets inside the ground and men’s washrooms on the first floor. The accused had mentioned numbers on them, which we first looked into. After the girl and her boyfriend were questioned, she stated that there was a possibility that Mr Ghodke was behind this.”

According to the police, the girl and the accused were in a relationship for around seven years and after she distanced herself, Mr Ghodke decided to get back by doing all of this. The police tracked him to his residence at Vikhroli and arrested him after he spilled the beans. The Vartak Nagar police has booked Mr Ghodke under section 505 of the Indian Penal Code and further probe is underway.

This is the third terror-related prank in the past few weeks after Uran in Navi Mumbai and Lokmanya Tilak Terminus (LTT). At Uran, the police found messages written on the pillar of a flyover praising ISIS, Abu Bakr Al Baghdadi, and their fidayeens. At LTT, pipe-like objects with wires wrapped around them were found with a phone number. The police later found it was a prank.