The ordinance will give the SEBC Act a retrospective effect following which the admission will be upheld. 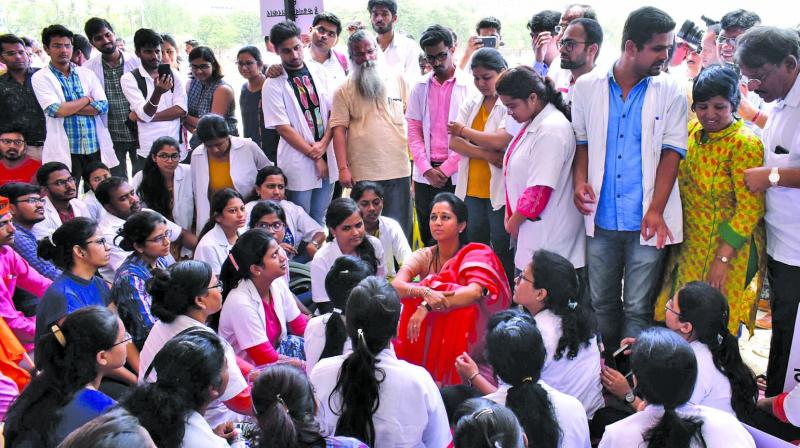 Mumbai: The state Cabinet on Friday approved an ordinance to uphold the admission of all the postgraduate medical and dental Maratha students on Friday who were affected by the Supreme Court’s decision to scrap admissions under the Socially and Educationally Backward Classes (SEBC) Act for this year. The ordinance will give the SEBC Act a retrospective effect following which the admission will be upheld.

The ordinance will be sent to the governor for his approval. The state has also decided to seek 217 additional seats, including 22 for dental courses, and has given an approval in principle to provide scholarship to the open category students who are seeking admission in a deemed university (private colleges).

The revenue minister and chairman of the Cabinet sub-committee on matters pertaining to Maratha reservation, Chandrakant Patil, said that the ordinance has been brought to ascertain that no student from the Maratha community is overlooked in the admission process.

The revenue minister said, “The ordinance will protect the interests of those students who had already got admission under the Maratha quota but were affected after the process was stayed by the court. The ordinance will go to the governor for his signature. After this step, the admission of these students will remain effective and a third round of admissions will also immediately commence.”

The Cabinet has approved the amendment in section 16(2) of the SEBC Act by the ordinance. The section says that the provisions of this Act shall not apply to admissions in educational institutions and the cases in which the admission process has already been initiated before the commencement of this Act and such cases shall be dealt with in accordance with the provisions of law and the government orders, as they stood before such commencement.

Mr Patil said that the admission process has been clarified in the ordinance. The Centre is expected to take a decision on it by May 21.

Maratha students Friday welcomed the decision to amend the Socially and Economically Backward Classes (SEBC) Reservation Act, 2018, to provide reservation to them in post-graduate medical courses. However, they said that their protest would continue till they got joining orders from the Maharashtra Common Entrance Test (CET) cell.

Earlier this month, the Nagpur bench of the Bombay HC said that the 16 per cent reservation given to Marathas by the state under the Socially and Economically Backward Classes (SEBC) category will not be applicable to admissions to post-graduate (PG) medical and dental courses this year. The apex court upheld the verdict of the high court. Post this, the CET cell issued a notice of cancellation of admissions under the SEBC quota, which affected around 290 students in the state.

A protesting student, Dr Sharad More, said that until they got the order from the Maharashtra CET cell to join colleges, they would continue the protest. Another student, who did not wish to be identified, said that they had not yet received a copy of the ordinance. “So, we are not aware of the conditions laid down and the provisions made in it. We will be satisfied only if we get the same seat and same branch,” he said.

The government on November 30, 2018 passed a law reserving 16 per cent seats for Marathas under the SEBC category. According to the court, since the admission process was initiated on November 3, the reservation under SEBC category could not be granted for this year’s admissions to post-graduate medical courses.