The structural auditor Neeraj Desai has also been arrested for making a false report. 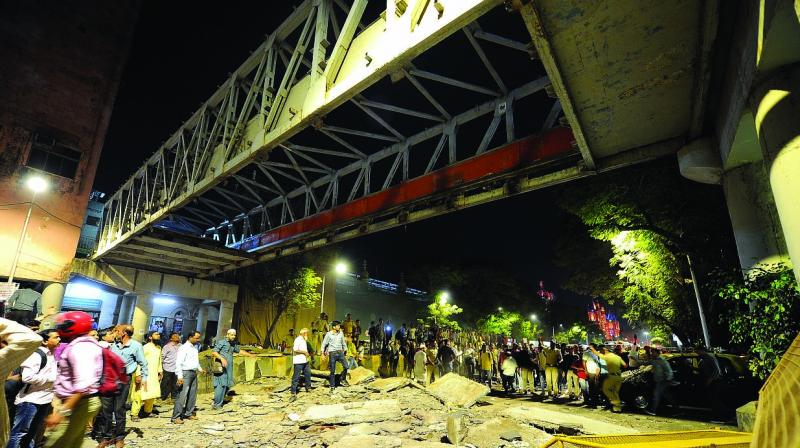 Mumbai: While the final inquiry report on the cause of the Himalaya bridge collapse mentions that the A ward of the BMC carried out beautification of the bridge including tiles’ replacement without waiting for any remarks from the bridge department, senior civic officials are now claiming that the beautification was carried out only after orders from the municipal commissioner’s office.

“It was only after meetings and ground visits with the commissioner, additional municipal commissioner and then chief engineer (CE) Sitlaprasad Kori that the beautification of the Himalaya FOB was carried out. The A ward did send a letter to the bridge department asking if the bridge needed any repairs. However, there was no reply. Also the additional MC himself signed the minutes of the meeting. When the ward was told by the commissioner’s office directly, there was no need to wait for the bridge department’s nod,” a senior BMC officer told The Asian Age.

“However, when the CE was present for the visit, he was well aware about what beautification and when it would be carried out,” the officer said.

The A ward carried out the beautification in 2016. The final inquiry report states that the executive engineer of the A ward gave permissions without the bridge department’s remarks.

Kori, along with two other engineers, is now in judicial custody and was arrested under section 304 (II) (culpable homicide not amounting to murder) of the Indian Penal Code (IPC).

The structural auditor Neeraj Desai has also been arrested for making a false report. The bridge that fell on March 14 killed seven and injured 30.