Devendra Fadnavis has, however, said the central government agencies are behind the police action. 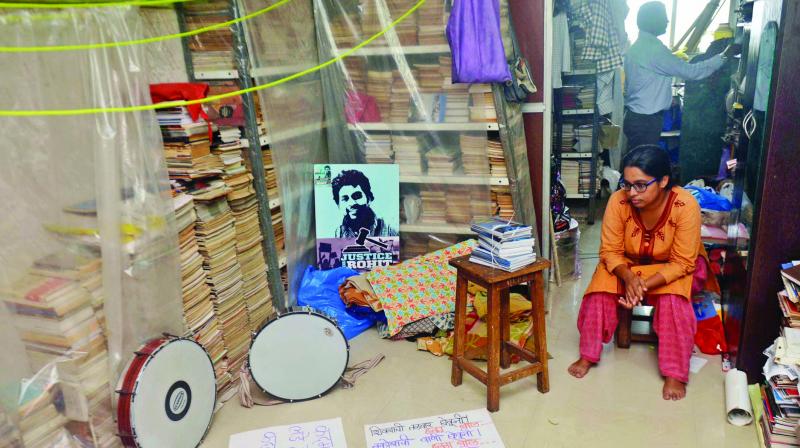 Officials carry out a search operation at the Kabir Kala Manch office in Govandi on Tuesday.

Mumbai: The state police on Tuesday raided the houses and offices of activists of the groups — Kabir Kala Manch and Elgar Parishad — that have been vocal after the violence in Bhima Koregaon on January 1.

Chief minister Devendra Fadnavis has, however, said the central government agencies are behind the police action.

Elgar Parishad organised the rally at Shanivarvada, Pune, on December 31, 2017, the speeches during which allegedly resulted in the violence the next day. The rally organisers have denied the charges saying the state government wants to suppress the voices of dalits and bahujan (backward castes).

Police searched the home of renowned lawyer Surendra Gadling. Mr Gadling is known for appearing in the cases of left-wing political activists who are accused of Maoism. “The police told me that they have come from Swaragate police station, Pune. They informed me that I am booked for organising Elgar Parishad. They took some computer hard disks, pen drives and a few books with them,” Mr Gadling said.

He also said the raids were an attempt to suppress the voice of honest dalit activists by the Rashtriya Swayamsevak Sangh (RSS)-led state government. “But we will not stop raising the issues of dalits and bahujans,” he said.

Mr Fadnavis clarified in Mumbai that the search in the state was part of a national level action. “It is not true that action is related to Elgar Parishad. Central agencies are taking these steps across the nation. There have been a few raids in Delhi also. The action is being taken on urban people connected to Maoist activities,” Mr Fadnavis said.

The police conducted similar raids in Mumbai and Pune also. In Mumbai, the police raided the houses of activists Sudheer Dhavale and Harshali Potdar of the Kabir Kala Manch.

In Pune, they raided the homes of Ramesh Gaychor and Sagar Gorakhe.

On that day violence broke out between two communities in Bhima-Koregaon, where the victory memorial is located. This has triggered caste tensions in Maharashtra as well as across the other parts of the country. The Pune police registered a case against four members each of the Kabir Kala Manch and the Republican Panthers. They have arrested Milind Ekbote, a right-wing leader, following the January 1 violence