Shiv Sena: No one can dislodge saffron combine in Maharashtra

The Sena chief said that it is the people’s responsibility to keep their alliance flourishing like a flower and to give its fragrance to the masses. 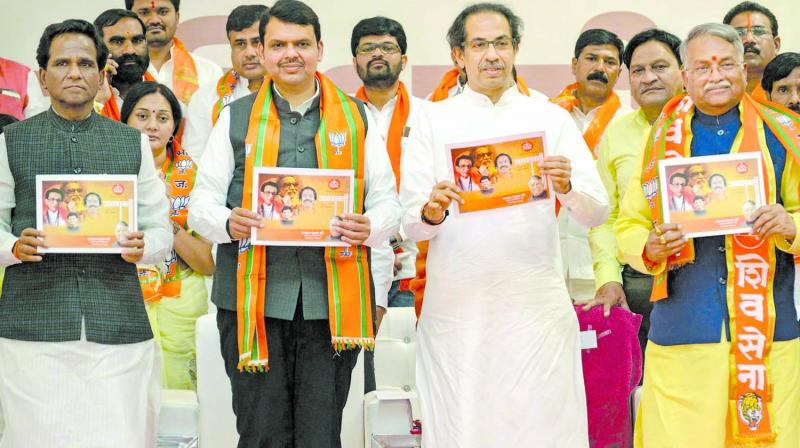 The convention was held at Srihari Pavilion. (Photo: PTI)

Mumbai: Shiv Sena chief Uddhav Thackeray on Sunday said that before forming the alliance with the Bharatiya Janata Party (BJP), there was difference between both parties. But the Sena had never brought these differences in the way of the state’s development, he said.

“We both don’t criticise (each other) at the cost of state’s development,” said the Sena chief in Aurangabad, while giving a clarification on nature of the saffron alliance.

Mocking the Opposition parties’ alliance, Mr Thackeray said that they walking hand in hand but trying to trip others at the same time. “Therefore, they are certainly going to fall,” he added. Mr Thackeray was speaking at the second meeting of the Sena and BJP Yuti in Marathwada region.

Attacking the grand alliance, BJP leader and chief minister Devendra Fadnavis said that 22 parties had forged an alliance a fortnight ago, but they are still fighting against each other. “The Samajwadi Party (SP) and the Bahujan Samaj Party (BSP) have kicked out the Congress from the alliance in UP and Aam Aadmi Party (AAP) have left the Congress in Delhi. They can’t live together. Althou-gh, we had fought one election separately, the common aspect that brought us together is Hindutva,” Mr Fadnavis said.

The joint convention of the Sena-BJP ground workers, office-bearers, district chiefs and elected representatives from Marathwada region was held at Srihari Pavilion.

Mr Fadnavis further added, “I want to remind people who are questioning our assistance the to farmers of Maharashtra, that they had given a loan waiver worth only Rs 4,000 crore, and that too after 15 years of pain. We gave a Rs 24,000 crore loan waiver and implemented it successfully in no time.”

The Sena chief said that it is the people’s responsibility to keep their alliance flourishing like a flower and to give its fragrance to the masses. “Also, forget about squeezing the saffron out of the state. Nobody should have the courage to even look at the saffron alliance,” he added.