Tender for EEH repair to be floated again

Last year, the contractors did not participate in the bidding process due to a shortage of procuring quarries and insufficient time. 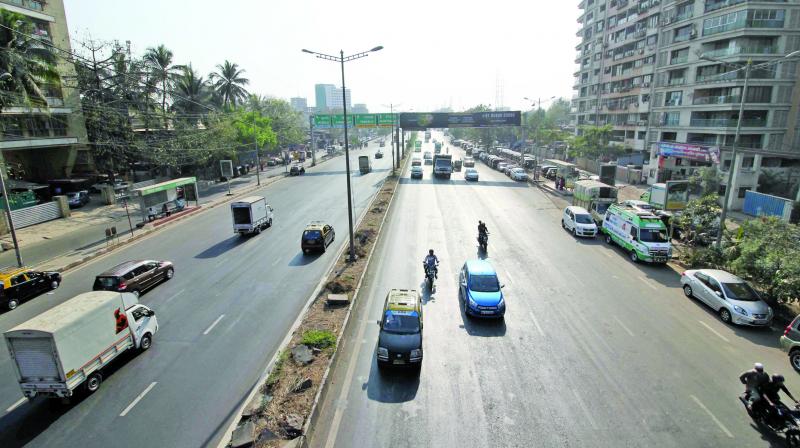 Only one bidder has come forward to conduct the patch work on Eastern Express Highway. (Photo: Shripad Naik)

Mumbai: The Mumbai Metropolitan Region Development Authority (MMRDA)’s bid to starts its preparation for monsoon has hit its first roadblock as only one bidder has come forward to do the patch work on Eastern Express Highway (EEH).  According to the norms, at least three bidders should participate in the bidding process. The authority is now floating tenders for the second time so as to start the monsoon work early this year. Last year too, there was a delay in getting the pre-monsoon work on both the EEH and WEH (Western Express Highway) done. Last year, the MMRDA was unable to get any contractor to do the work on both highways.

“As of now, only one bidder has shown interest for EEH. We will float tenders again because at least three bidders are required. The work on EEH will be done in four packages, so one contractor will not be a feasible idea. We have located patches on the EEH which need repair. The entire stretch will not be taken up for repairs,” said an MMRDA official.

Last year, the contractors did not participate in the bidding process due to a shortage of procuring quarries and insufficient time.

Thus, this year MMRDA has started floating tenders in advance. “I don’t think that this year quarries will be an issue for the contractor, since many have communicated that quarry can be procured from Turbhe this year,” added the official. Tenders have been floated to carry out repairs on the entire 25km stretch of the WEH as well.

The EEH and the WEH are the two important arterial roads of the city, which are used by lakhs of commuters on a daily basis.

“Many potholes are usually spotted on EEH after Bhandup and Mulund. During the monsoon, it becomes a tedious task to drive on this route,” said Mario Rodrigues, a resident from Vikhroli.

11 FOBs on highway to undergo repairs

Around 11 FOBs on Eastern Express Highway (EEH) will be taken for repairs. The MMRDA has recently called tenders to appoint a contractor for this work. Not all, but few of the FOBs require routine repairs, said a MMRDA official. The authority will need to shell out around Rs 1 crore for the repairs.

The FOBs between Sion and Mulund will undergo repair work. Along with this, the authority is also planning to begin the desilting work at EEH by March 10. “The repairs will be a part of regular maintenance wherein the worn out tiles will be replaced. Also, at few FOBs, the railings have been displaced. All such issues will be looked after during the repairs. It may cost around Rs 1 crore to carry out the repairs,” said a senior MMRDA official.

This is the first time MMRDA would be carrying out such repair works after both the highways were handed over to them last year.  Earlier, the Public Works Department (PWD) used to maintain the FOBs and highways. “Few FOBs are in bad shape. The steps are all broken and hence it is risky to use it. During monsoon, people also slip and fall due to worn out stairs of such FOBs,” said Jitesh Kumar, a resident from Mulund.

Meanwhile, the authority is also awaiting administrative approval to start with cleaning of storm water drains, which is along the stretch of EEH.