Sule is in Mumbai for three days to campaign for the upcoming Brihanmumbai Municipal Corporation elections. 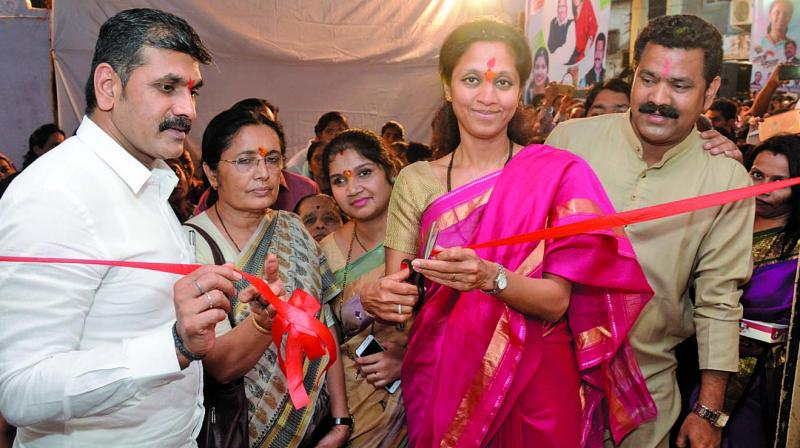 NCP leader Supriya Sule at an event at Rashtriya Mill Mazdoor Sangh, in Parel on Tuesday.

Mumbai: Supriya Sule, the daughter of Nationalist Congress Party (NCP) chief Sharad Pawar and two-time Member of Parliament in Lok Sabha, is clearly emerging as a prominent face of the party in the state. Ms Sule is in Mumbai for three days to campaign for the upcoming Brihanmumbai Municipal Corporation (BMC) elections. She will address women’s gatherings arranged by the party in North, North Central and North West Mumbai and inaugurate election offices of NCP candidates across the city.

Ms Sule slammed the Bharatiya Janata Party (BJP) over its doublespeak about the Shiv Sena. “On one hand, your leaders allege corruption in the BMC and you are simultaneously discussing an alliance with the Shiv Sena. How come this is even possible?” she asked the BJP in a rally at Parel, where she also inaugurated the party’s social media backroom office for the BMC elections.

The NCP is facing a leadership crisis, with its second rank of leadership being discredited due to various reasons, including corruption charges. Ex-deputy chief minister and Ms Sule’s cousin, Ajit Pawar, is facing corruption charges in a multi-crore irrigation scam, while another strongman and ex-minister, Chhagan Bhujubal, is in the Enforcement Directorate’s (ED’s) custody with regard to a disproportionate assets case. The party’s state president, Sunil Tatkare, is also facing an Anti-Corruption Bureau inquiry into corruption charges during his tenure as irrigation minister.

Due to a negative perception among voters, born out of such cases, the party had to face severe losses in the 2014 assembly elections and has still not recovered well. In such a situation, the NCP is bound to project someone who could be seen as moderate with a clean image and is appealing to young voters. Ms Sule seems to have filled this vacuum to position herself as the leader of the party.