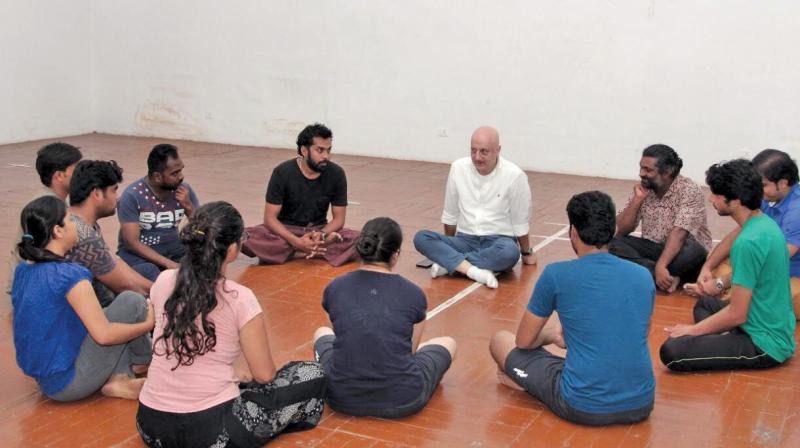 Anupam Kher had informal chat with faculty and students on his surprise visit.

Pune: Anupam Kher, the newly appointed chairman of the Film and Television institute of India (FTII), sprang a surprise by making an impromptu visit to its campus in Pune on Monday.

He interacted with the students and faculty members. Mr Kher did not even keep the FTII administration in the loop for his first visit to the institute after his appointment as chairman.

Talking about his visit, Mr Kher (62) said, “I wanted to walk into the institute like a student just like how I had entered here 39 years ago. I did not want to carry the burden of what I have achieved. I learnt acting at the National School of Drama and I learnt how to face a camera in this institute.”

Asked about his first ‘encounter’ with the agitating students, Mr Kher said, “This is the best possible reception I could have got, where students were beating drums on my arrival. Beating drums to welcome somebody is there in our tradition.”

Mr Kher on Monday also held a meeting with students including the representatives of FTII Students Association (FSA) to discuss their issues.

He also had lunch with the students at the FTII students’ mess.

Mr Kher said, “I held an informal meeting with students where healthy discussion took place. There are issues everywhere. Students leave their families and come here to learn something. If they are facing some issues, those issues should be addressed properly. I am one of them and we will solve the issues soon.”

When Mr Kher was asked about issues over conflict of interest, as he also runs a private acting institute, he said, “I have been running the institute for the last 14 years with a commitment. The institute has received international accreditations. This experience will be helpful here in my tenure as a chairman.”