Dongri areas such as Nishan-pada Cross Lane, Tandel Cross Lane are extremely congested due to presence of legal and illegal buildings. 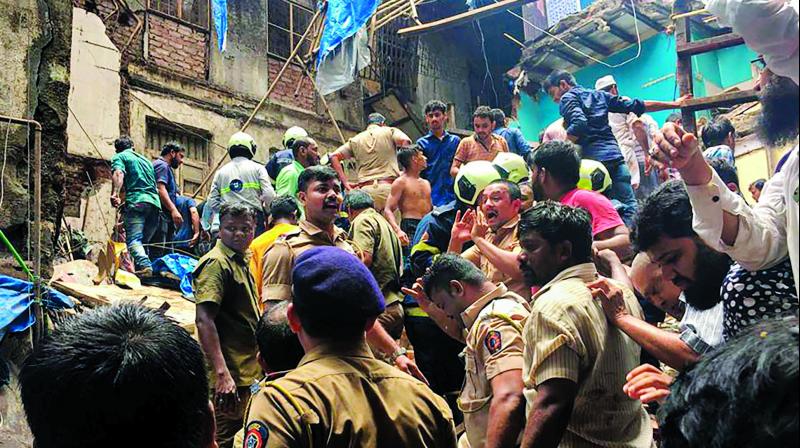 As per reports and eyewitness accounts, most of the buildings in the area are in a dilapidated condition. Further, the lanes are too narrow for the smooth conduct of relief and rescue operations.

Mumbai: As per reports and eyewitness accounts, most of the buildings in the area are in a dilapidated condition. Further, the lanes are too narrow for the smooth conduct of relief and rescue operations.

The areas in Dongri such as Nishanpada Cross Lane and Tandel Cross Lane are extremely congested due to the presence of legal and illegal buildings. As a result, the roads, too, are very narrow.

The building crash site was crowded and chaotic as hundreds of onlookers created hurdles in the rescue operation even as NDRF and civic personnel disposed the rubble with their bare hands to reach the survivors.

The narrow roads leading to the ill-fated four-storeyed building meant that NDRF jawans could not get earth-moving equipment near the rubble, leaving them with no option but to conduct a manual search-and-rescue operation. The rescue work is expected to prolong because of this, a NDRF official at the site said.

Onlookers crowding the site and the lanes leading to it created hurdles in the quick evacuation of the injured to ambulances and onward to hospitals, said an official. Several people in the area were also seen lending a helping hand or trying to stay out of the way of those officially tasked with rescuing the victims of the collapse. Visits by politicians, too, hindered the rescue operations. To the extent that the police had to plead with the people to get out of the way of the ambulance.

A youngster was seen shouting instructions through a megaphone to onlookers to clear the area so that the rescue operation could be carried out without any more obstacles than those that the topography was already posing.