TV channels showed dramatic visuals of a child, wrapped in a cloth, being carried out of the debris by rescue workers. 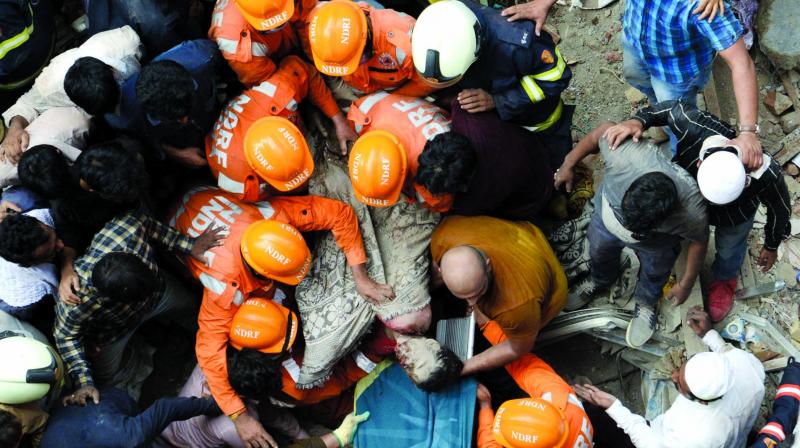 As night fell on the city, hundreds of people continued the job of rescuing people from under the rubble of the building, which was located in a bustling lane off Tandel Street.

Mumbai: Members of nearly 12 families were believed to be trapped under the debris of the ill-fated Kesarbai 25/C building at Dongri.

As night fell on the city, hundreds of people continued the job of rescuing people from under the rubble of the building, which was located in a bustling lane off Tandel Street.

TV channels showed dramatic visuals of a child, wrapped in a cloth, being carried out of the debris by rescue workers. The child is alive, officials said. A barely conscious woman was also pulled out and carried in a makeshift stretcher made of cloth. There were many anxious, frantic moments as family members of those missing waited for some news, their hopes dimming with each passing hour.

One of them was the Salmani family that resided on the second floor with their guests. As fate would have it, Firodous Salmani and her children survived. However, her son Nawab’s wife Sana (25) and son Ibrahim (1.5) were declared dead late on Tuesday evening. Two of her guests also died in the incident.

Soon after the incident, the family realised of their guest’s death, however, Sana and Ibrahim were still missing.

Firodous’ house was located on the second floor where she lived with her son, daughter, daughter-in-law and grandchildren. On Tuesday, the two sons of her brother Mansoor Salmani had come to visit her.

Left devastated by the collapse, Firdous said, “My daughter Zeenat Salmani and her daughter Nushrat were also there when the building collapsed. We are all safe but my brother’s sons are dead and my daughter-in-law Sana and her son are missing.”

Firdous and her daughter Zeenat were admitted to the hospital.

Her son Nawab, said, “My cousins Muzamil and Zuber had come to visit us. But we have lost both of them.”

“My mother is seriously injured and other family members, including my wife and son, are still untraceable,” further said Nawab Salmani from his hospital bed in a voice that is a mixture of pain and anguish on Tuesday.

While resting on a bed in state-run J.J Hospital, Nawab, who is in his 30s, said he could only recall that he was sleeping in a flat in the ill-fated building and suddenly heard a loud thud.

“Next thing I remember is I am lying on a hospital bed with some injuries to my head and a hand,” he said.

What worried the young man more is that even after seven hours after the mishap, his wife Sana (25) and son Ibrahim (18 months) were still untraceable. “My mother is seriously injured but she is out of danger. I have informed authorities about my family members but have received no information from them about their whereabouts so far. They are still untraceable even around 6-7 hours after the tragedy,” he said. Both of them were later found dead, but Nawab was unaware of it.