The National Disaster Response Force said six men, four women and a child were killed while eight others were injured. 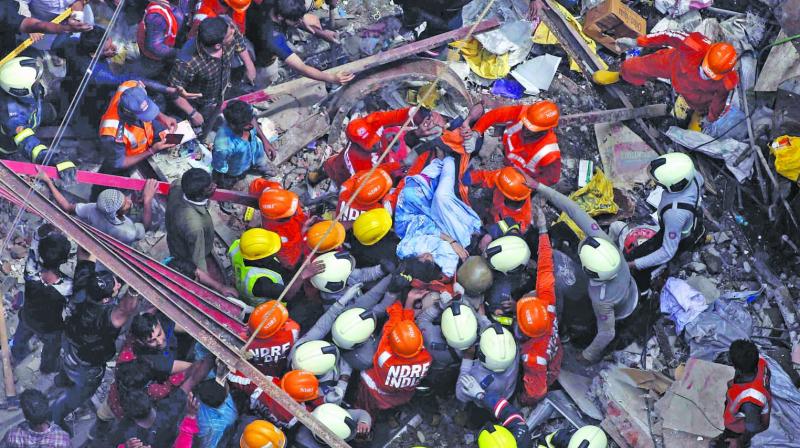 Rescuers carry out a survivor from the site of a building that collapsed in Dongri, south Mumbai on Tuesday morning. (Photo: AP)

Mumbai: At least 11 people were killed and over 40 others feared trapped under the debris as a decrepit building that was at least a hundred years old collapsed Tuesday in south Mumbai’s congested Dongri locality, once again exposing the creaking infrastructure of India’s financial capital.

The four-storey Kesarbai Building 25/C, a residential complex, in a maze of byzantine lanes and houses clustered closely together, came down at around 11.40 am, civic officials said.

The National Disaster Response Force said six men, four women and a child were killed while eight others were injured.

Officials of the Brihanmumbai Municipal Corporation (BMC) had put the death toll at four and the number of injured at nine. Maharashtra housing minister Radhakris-hna Vikhe Patil earlier said 12 to 13 people were killed, citing preliminary information.

At least eight people had been rescued, including two infants. Doctors and hospital staff were at the site to offer immediate medical help. “After the building collapsed, locals started lending a hand by attempting to remove big boulders,” said Dilip Sawant, who had joined in the rescue efforts. Another Good Samaritan at the site said: “We have inserted a pipe into the debris so that the trapped people do not suffocate. This has saved lives.”

The actual number of people trapped beneath the debris is unknown as the original tenants had vacated their homes and rented it out to other families after the building was declared the dilapidated.

While chief minister Devendra Fadnavis ordered a probe into the incident and assured strict action against those found guilty, the Opposition parties pointed a finger at the state government, the BMC and the Maharashtra Ho-using and Area Develo-pment Authority (Mhada), holding them responsible for the disaster.

However, late Tuesday evening, Mhada’s chief spokesperson Vaishali Gadpale cleared the air on the building’s ownership status. In a statement, she said: “The main dilapidated structure — Kesarbai Building 25/C — was completely evacuated by the Mhada last year and the building, which collapsed on Tuesday, was the illegal rear portion of this building which was not within the purview of the Mumbai Building Repair and Reconstruction Board.”

As night fell on the city, hundreds of people continued the job of rescuing people from under the rubble of the Kesarbai Building, which housed an eatery on the ground floor and was located in a bustling lane off Tandel Street.

The difficult access to the site prevented ambulances and earth movers from being deployed, and rescue workers, including residents, used bare hands to remove concrete chunks, door frames and household items.  Ambulances had to be parked some 50 metres away.

Scores of locals joined in the effort, forming a human chain to help in removing the debris brick by brick and picking up slabs of concrete to locate those buried in the predominantly Muslim area. The rescue work, hampered by narrow lanes, was further hindered by politicians, including ministers and legislators, making a beeline for the site.

Prime Minister Narendra Modi was among those who expressed his anguish at the loss of lives. “Collapse of a building in Mumbai’s Dongri is anguishing. My condolences to the families of those who lost their lives. I hope the injured recover soon,” the PMO tweeted, quoting Mr Modi.