SSC class 6 geography text with printing error to be withdrawn. 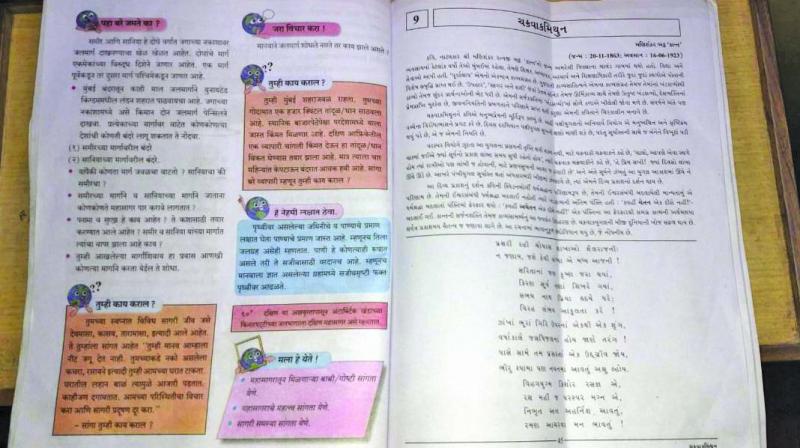 An inside page of textbook in Gujarati

Nagpur: State education minister  Vinod Tawde on Monday admitted in the legislative council that there was a printing error in the SSC class 6 Marathi medium geography textbooks. He said that action would be taken against the printer, who had printed a few pages of the textbook in Gujarati. The government has also directed that all copies of the book carrying the printing mistake be withdrawn from the market.

While admitting to the mistakes in the printing of the books, Mr Tawde told the house that the government has asked the printer for an explanation and that action would be taken against the printer as per clauses in the contract and tender conditions. He directed all book depots to withdraw the books with printing errors and exchange the book so that students do not suffer.

Earlier, the state revenue minister and leader of the house Chandrakant Patil apologised for alleging that there was no printing error in the textbooks and that the opposition may have printed copies of the book in Gujarati. An angry Sunil Tatkare from the Nationalist Congress Party had threatened on Friday to consume poison in the house if the government could prove the charges. Mr Patil’s apology came after leader of the opposition Dhananjay Munde again raised the issue in the council.

Meanwhile, Mr Tawde said Balbharati, has been printing 21 crore books every year in eight languages including, Marathi, English and Gujarati.

“We invite tenders on national level for printing. For this year, 114 printers from the state had printed 92 per cent of the textbooks and 28 printers from other states printed the other eight per cent. A total of 11.5 lakh Geography books for Marathi medium class 6 were given to 11 printers, of which one lakh were printed by Sholak Printers from Ahmedabad. Their sister company was given the work of printing and binding the books in Gujarati. So there may have been a mistake during the binding,” stated Mr Tawde.