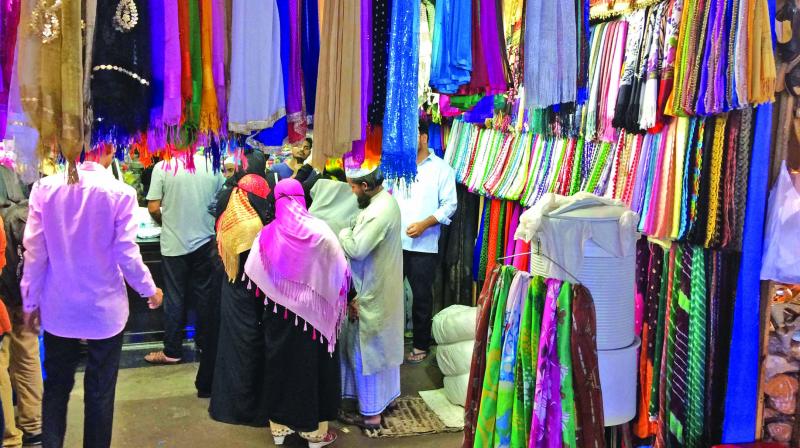 Women out shopping at Bhendi Bazar on Wednesday, ahead of the holy month of Ramzan. (Photo: Shripad Naik)

Mumbai: Beginning Thursday, May 17, Muslims in the city will embark on the month of fasting i.e. Ramzan. This is considered very holy and a month of abstinence where Muslims do not eat or drink anything from dawn to dusk.

However, the highlight of Ramzan is the delicacies sold at various locations in the city from evening to the small hours of the next day, which many binge on, regardless of their religion, caste or community. Ramzan will culminate in Ramzan Eid on June 16, 2018. Dr Shabbir Lokhandwala said that for all those fasting, braving the sweltering heat will be an uphill task.

“As drinking of water or any liquid is not allowed during the fasts, the person who is fasting should ensure that he/she does not get dehydrated through the day and can last till the time of breaking the fast,” he said.

He also advised having light but nutritional meals rather than heavy and oily meals both in the morning and evening as these would help the body conserve more energy.

Apart from the religious aspect, the biggest attraction of Ramzan is the eateries that crop up at various locations across the city.

Devansh Dere, a call centre executive working at Goregaon said, “These eateries, although illegal, are a lifeline for those working late nights as they are operational almost till 4am in the morning.

The dishes served by them are also good and as the prices are not very steep, it is an affordable proposition for people like us.”

Maulana Shabani Kargili, a cleric from south Mumbai said that apart from abstaining from food and drink, Ramzan also exhorts devotees to abstain from all vices.

“The real purpose of fasting is not just to starve oneself but to conduct oneself in such a manner that will get you closer to the creator. One should avoid wasting time and invest time in acts of worship like reciting the Quran and trying to be a good human being,” said Kargili.