Officials also said that contractors were experimenting with different construction layouts to complete civil works of the station faster. 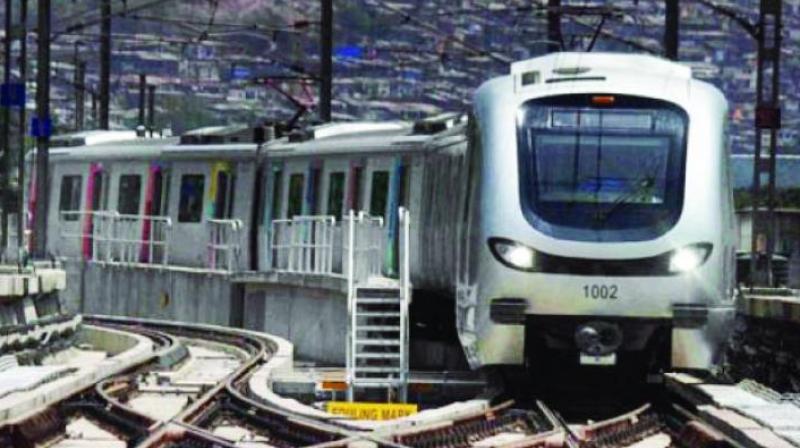 The corridor has a total 14 stations. The authority had called in various architectural firms, colleges, architects and consultants to design the stations. (Photo: PTI/Representational)

Mumbai: The Aarey station will be the first among other proposed stations along metro 7 (Andheri east to Dahisar east) to complete its civil work, according to a senior MMRDA official.

The work will be completed by October. At least three stations including Aarey are currently at an advanced construction stage. So far, 45 per cent of the civil work has been completed.

A senior official of the Mumbai Metropolitan Region Development Authority (MMRDA), said, “Civil work is at an advanced stage at three stations including Aarey, Magathane and Mahananda.

The Aarey station will be completed first, followed by the other two. The designs of the interiors are being finalised. A few designs submitted by architects are being considered.”

Officials also said that contractors were experimenting with different construction layouts to complete civil works of the station faster.

The corridor has a total 14 stations. The authority had called in various architectural firms, colleges, architects and consultants to design the stations.

The MMRDA has planned to construct leaner stations than along metro line 1. The authorities are carrying out a detailed study of all the changes proposed for upcoming metro lines. In addition to this, there are plans to widen the footpaths outside these stations.

Meanwhile, newly-appointed metropolitan commissioner R.A. Rajeev recently visited the construction site of metro 7 and asked contractors to speed-up work. “Forty-five per cent of the civil work has been completed till now,” the official added.

PNB official got Rs 1.02 crore in kickbacks
The CBI in its charge sheet has claimed that PNB official Gokulnath Shetty received Rs 1.02 crore in kickbacks to favour jeweller Mehul Choksi in the scam. The CBI also said that it found this graft money in Shetty and his relatives’ bank accounts, and that the amount may further increase as investigation is still underway.

According to the CBI, the investigation revealed that the then deputy manager of PNB, Brady House, Mumbai, allegedly obtained illegal gratification from a said group company in return for the favour of issuing fraudulent letters of undertaking (LoUs) and foreign letter of credits (FLCs).

The charge sheet read, “Pursuant to the criminal conspiracy, Gokulnath Shetty, during the period 2015 to 2018, debited an aggregate amount of Rs 2.28 crore to the account of Gitanjali Exports Corporation Ltd., maintained with PNB, MCB, Brady House, Mumbai, towards arranger fees, for the quotes obtained by Debajyoti Dutta, proprietor of Rishika Financials for the accused companies for issuance of LoUs by PNB, out of which he compelled Debajyoti Dutta to part with an aggregate sum of Rs 1,02,53,664 as illegal gratification for himself by way of cheques favouring himself and his family members by threatening him with stopping his business.”