Five days before, the two had rented a flat attached from behind to Mayura Jewellery, located near Nerul sector 8. 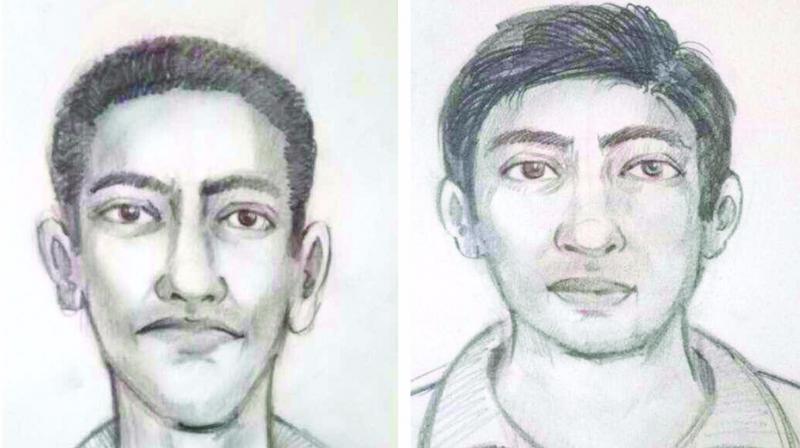 Sketches of the thieves who stole jewellery from the shop.

Mumbai: The Nerul police is on the lookout for two thieves who allegedly posed as tenants to hire a flat adjacent to a jewellery shop, only to rob it and decamp with cash and jewellery worth Rs 50 lakh Sunday night.

Five days before, the two had rented a flat attached from behind to Mayura Jewellery, located near Nerul sector 8. They broke into the shop by making a hole in the wall. The police questioned the landlord who could not produce copies of the duo’s identity particulars. However, based on information provided by him, the police prepared sketches of the wanted accused.

Police officials said that the incident came to light at 9.30am on Thursday when Gopal Sadana opened his jewellery shop only to find the locker broken and all the jewellery missing. Seeing a three-foot hole in the back wall of his shop, he informed the Nerul police.

Nerul police said, “The thieves used gas cylinders and cutter machines to drill a hole in the back wall of the shop and also cut through its locker, taking away gold and silver jewellery worth Rs 50 lakh and cash from it. The accused also took jewellery kept in 20 different boxes.”

The police said that flats behind the shop had been empty for the past few days. On Friday afternoon, the owner of one such flat, Shabhu Karkar, rented his room which was right behind the jewellery shop to two unknown men. He did not draft any agreement, neither did he check the two men’s identities. The police interrogated Karkar and with his help, prepared two sketches of the accused, who are the main suspects in this case.

Nerul Police API, A. Gaikwad said, “We have formed three different teams to find the culprits. We have received their sketches and sent them to different police stations in India. The jewellery shop had CCTV inside it but the accused ran away with the CCTV footage and broke the system. The security guard of the shop had gone to his native place for the past four days so no one witnessed the act.”

The incident has sent shock waves through jewellers in Navi Mumbai, considering there have been such burglaries in the past.