After the FIR was registered, the police is currently recording statements of the executives of the construction firm. 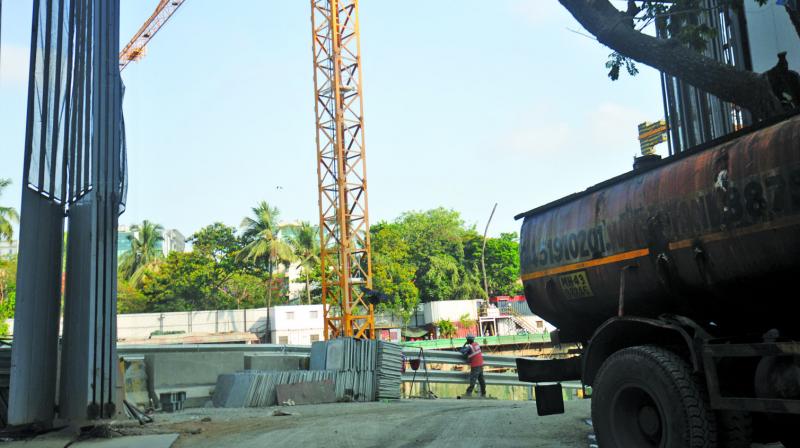 The construction site in question of Rustomjee Developers at BKC. (Photo: Debasish Dey)

Mumbai: The Brihanmumbai Municipal Corporation’s (BMC) garden department has filed an FIR at Kherwadi police station against Rustomjee Group under the Maharashtra Tree cutting Act, 1975 for their alleged involvement in cutting trees at an under construction site of a luxury project in Kalanagar. However, the Rustomjee Group has denied all the allegations.

After the FIR was registered, the police is currently recording statements of the executives of the construction firm.

The Group denied all the allegations in response to an email query. It said, “We do deny each and every allegation as the site status has been duly submitted to BMC from time to time. Total as per tree NOC granted, 22 trees have been approved and cut against which we are supposed to plant 44 trees before completion of the project and the same shall be done before completion of the project. We had applied for 22 trees for which the permission was granted by BMC.”

In the complaint filed by the BMC garden department’s officer, Yogesh Walunj, reads, “For the proposed construction 22 trees were to be cut, and 172 trees were to be replanted, and 95 trees were to be kept as it is. The permission was given from our side on this terms and conditions. However, on conducting an inspection on October 25, 2016, it was noticed that few trees are getting dried up.”

The complaint, further, reads, “Later, on December 12, 2016, another inspection was carried, and it was noticed that despite the 95 trees that were supposed to be kept as it is, there were around ten trees that were not visible at the site. Hence, I am hereby filing the complaint to the police inspector and the H-east ward regarding the same and submitting the documents hereby to support my complaint.”

A police official from the Kherwadi police station, said, “We had registered FIR after the official from BMC’s garden department approached us. We are recording statements of the executives from Rustomjee currently. The sections under which FIR is registered don’t mandate for arresting anyone but directly filing chargesheet and taking the matter to the court.”

Akhil Chitre, a resident of the area, said, “I have been following up with the police and BMC authorities since almost two years now, but no one paid heed to my complaints. It was after I repeatedly urged the BMC officials to file complained they have filed the FIR.”

“Previously, the police had only filed a non-cognisable (NC) offence against the builder and were not ready to file, and FIR and it was only after the court ordered the police finally filed an FIR,” Mr Chitre said.