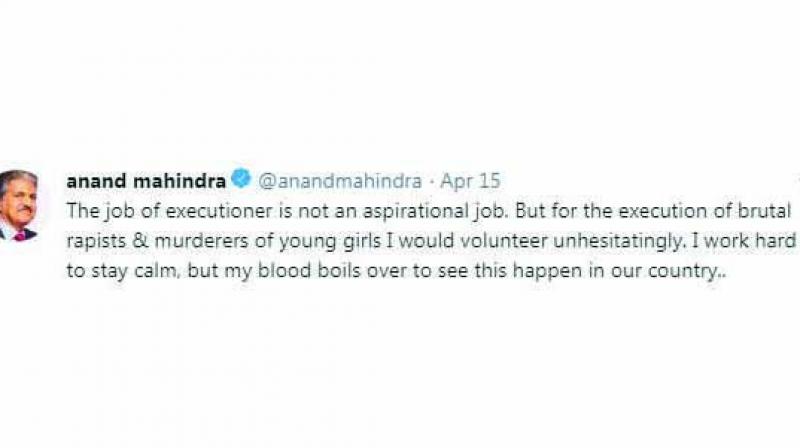 Mumbai: Social media is seething with outrage over the brutal rapes and murders of children that are being reported from across the country, with several users demanding that the harshest punishment be meted out to the accused. In one such tweet, industrialist Anand Mahindra said that he would happily volunteer to execute the rapists and murderers unhesitatingly.

Mr Mahindra tweeted on Sunday, “The job of executioner is not an aspirational job. But for the execution of brutal rapists & murderers of young girls I would volunteer unhesitatingly (sic).” Reacting specifically to the rape of a 9-year-old girl in Surat, whose dead body was found last week with 86 injury marks, Mr Mahindra claimed in his tweets that despite trying hard to maintain a calm persona, his blood boils on seeing this happen in India.

While the entire nation is saddened with the brutal gang-rape and murder of an eight-year-old in Kathua, Jammu & Kashmir, a number of Bollywood personalities have joined the campaign demanding justice for the Kathua victim. Celebrities like Swara Bhasker, Kalki Koechlin, Huma Qureshi, Kareena Kapoor, Javed Akhtar, Anushka Sharma and Sonam Kapoor had posted pictures of themselves holding placards that read, ‘I am Hindustan. I am Ashamed. #JusticeForOurChild 8 years old. Gangraped. Murdered. In ‘Devi’-sthaan temple. #Kathua’.

Netizens are also questioning the alleged inaction in the Unnao rape case and the alleged attempt to deny justice in the Kathua rape case . A hashtag by the name of ‘#KathuaMurderCase’ and ‘#JusticeForAsifa’ is trending on the net.

One of the several tweets posted by person who goes by the handle @NatashaBangaroo read, “I hate hearing India's backwards mentality toward women. Cows are protected but not women? How are our lives worth less than that of an animal?”

A platform to initiate e-petitions, Change.org hosted an initiative by a group of women from Jammu and Kashmir appealing for justice in the case of rape and murder of the Kathua victim. By Monday night, 1,571,688 people had signed the e-petition seeking that investigations by the crime branch are fast tracked and to be followed by a fast-track court trial so that justice can be dispensed.