Two smugglers were intercepted in Mumbai on Saturday and one on Friday amounting to gold seized over Rs 1 crore. 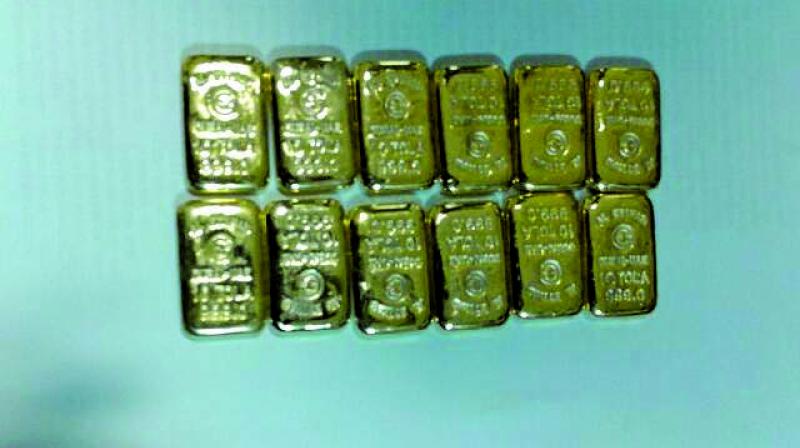 Both the arrested alleged smugglers hail from Sri Lanka.

Mumbai: The Air Intelligence Unit (AIU) of the Mumbai customs on Saturday arrested two Sri Lankan passengers for smuggling 2.92 kg of gold in their rectum. The passengers, who are textile traders by profession, arrived in Mumbai via Emirates. The unit, on Friday, had intercepted a 26-year-old resident of Karnataka for smuggling around 570 grams of the yellow metal. The gold seized from all three accused is valued at over one crore.

Jameer Abdul Wahid (42), a holder of Sri Lankan passport, arrived from Dubai by Emirates flight EK508 and was intercepted at the arrival hall of the airport. A personal search resulted in the recovery of 13 gold bars weighing 1,516 grams approximately valued at Rs 45 lakh. The said gold bars were concealed in his rectum after which he was arrested. In another case, Althaf Sahul Hameed (48), who also holds a Sri Lankan passport and had arrived from Dubai by the same flight, was arrested for smuggling 12 gold bars weighing 1,399 grams, which are approximately valued at Rs 42 lakh. They too were concealed in his rectum.

“Both the arrested passengers hail from the Puthalam district in Sri Lanka. They are frequent fliers to India and are in trading activities in textile material, readymade garments and cosmetics,” said an AIU official.

The AIU officers had also intercepted Sayed Noorulameen on Friday for smuggling gold. He had arrived from Dubai by Gulf Airways flight GF 64 and was stopped on suspicion that he was concealing gold on his person. After his interrogation, he was found carrying a hand-operated juicer machine, in which two cylindrical gold rods were concealed in the hollow portion of the vertical column fixed to the base.