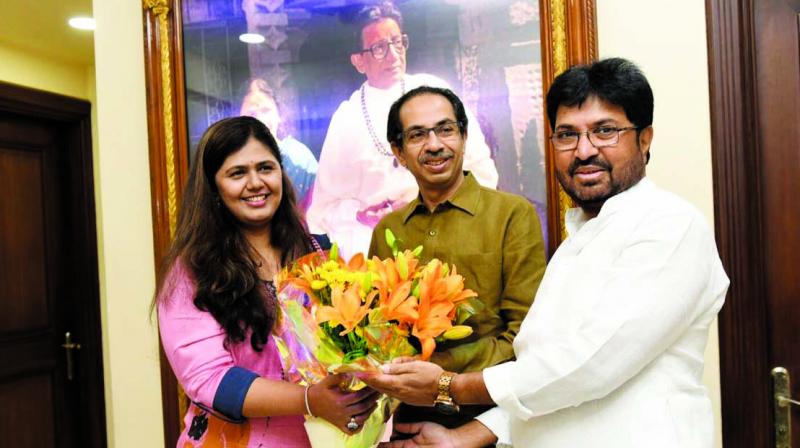 Mumbai: The dispute over the Jalna constituency still refuses to die. As Shiv Sena member of Legislative Assembly (MLA) Arjun Khotkar continues to be adamant about contesting the Lok Sabha seat against Bharatiya Janata Party (BJP) state chief Raosaheb Danve, both Sena and BJP have been unable to come to a conclusion as to who will contest the seat.

According to sources, one more meeting will be held just before the alliance’s rally at Aurangabad on Sunday to sort out the issue.

Mr Khotkar met Sena chief Uddhav Thackeray and BJP leader Pankaja Munde, who is also the women and child welfare minister, Saturday at Matoshree. However, no solution came out from it. Both Mr Khotkar and Ms Munde have been appointed as the alliance co-ordinators for the Marathwada region.

The joint rally of BJP-Shiv Sena will be held in Aurangabad on Sunday. Before this, a meeting will be held between chief minister Devendra Fadnavis, Mr Thackeray and Mr Khotkar. The Jalna dispute is likely to be solved in the meeting, said a party insider.

A couple of days ago, Mr Khotkar had called on Congress MLA Abdul Sattar, leading to speculation that he was on the verge of joining the Congress to take on Mr Danve. However, later he made it clear that no such decision had been taken.

Mr Khotkar has often publicly vowed to contest the Lok Sabha polls against Mr Danve either as a Sena candidate or an independent candidate. However, after the Sena agreed to a pre-poll alliance with the BJP for the Lok Sabha and Vidhan Sabha elections, it remains to be seen what decision he now takes.

With the pre-poll alliance in place, it would be a huge embarrassment for the BJP if Mr Khotkar contested as an independent candidate and managed to defeat their state party president.

Mr Khotkar has had a long-running political feud with Mr Danve as both hail from the Jalna district.