Indian High Commission in Jamaica which will follow up on this case with police and help in every possible manner.” 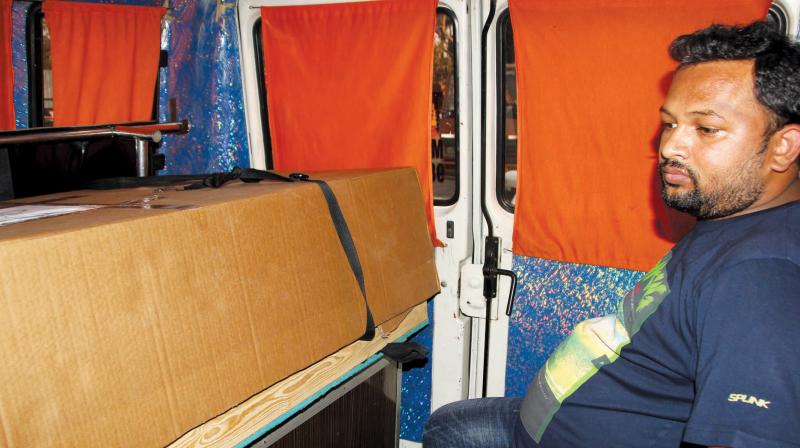 A family member sits beside the coffin of Rakesh Talreja (24) whose body arrived in Mumbai. (Photo: Mrugesh Bandiwadekar)

Mumbai: Five days after Vasai resident Rakesh Talreja (24) was shot dead by suspected robbers at Kingston in Jamaica, his body arrived in Mumbai on Thursday. The family, which is yet to come to terms with the murder, told The Asian Age that Jamaican authorities were allegedly not making any effort to nab the killers.

The deceased’s father, Prakash Talreja, retired private firm clerk, told this newspaper that his family sought justice and that Rakesh’s unfortunate demise meant that it was a huge risk for parents to send their sons abroad for work.

A relative Nandu Bhatt said, “We want justice. We never imagined any such thing would happen and we would receive his corpse. It is a risk sending children abroad. There are many whose children are working abroad and we seek safety.”

“The government should take cognisance of such a serious matter. Why has no one been nabbed till now? We urge the government to make some effort and nab the culprits,” he said.

Rakesh’s neighbour, Rajan Hatkar, said, “Rakesh had lucky escapes twice: once, when he was injured in a railway accident and the second time when, as a child, he got lost and could not be located for eight hours at a stretch. Sadly, this time, he ended up losing his life.”

Constant Spring police is yet to get any leads on the four unidentified men believed to have entered Rakesh’s home in Cherry Gardens, Kingston 8, Jamaica — which he shared with two Indians — with the intention to rob. Rakesh worked as a salesperson for Caribbean Jewellers, Kingston. His parents, who stay at Ambadi Road, Vasai (west), were informed over telephone by his employer that their son had been shot dead at 7 pm (Jamaica time) on Thursday.

Indian High Commission in Jamaica which will follow up on this case with police and help in every possible manner.”