Metros   Mumbai  17 Jan 2019  Govt expects us to do what it wants, says Shashank Rao
Metros, Mumbai

Govt expects us to do what it wants, says Shashank Rao

Rao said that action against BEST workers would not be taken by the BEST administration for the BEST bus strike. 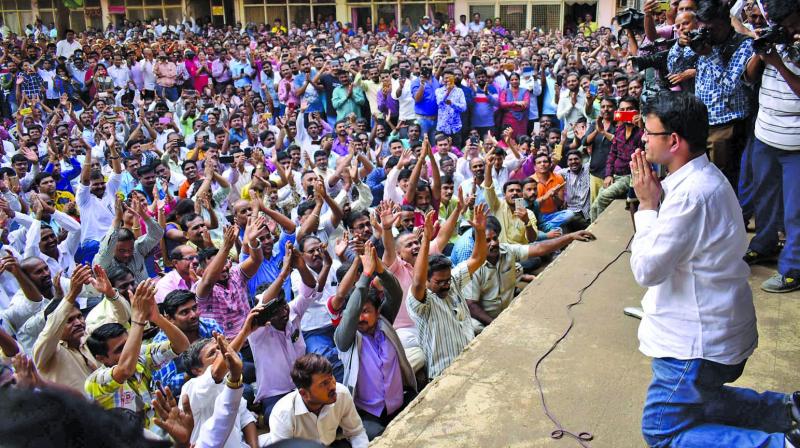 Mumbai: With the first Brihanmumbai Electric Supply and Transport (BEST) bus having left the Wadala depot around 4.10 pm Wednesday, 893 buses were operated across the city by 8pm.

While addressing BEST workers at Wadala Wednesday, Shashank Rao said that when the meeting was held over the BEST union’s demands at the mayor’s bungalow, Shiv Sena chief Uddhav Thackeray asked from where the money would come to meet workers’ demands.

Mr Rao said that the minimum wages of each worker would be increased to Rs 7500. The increased salary would be given from January. Junior pay grade would also be increased from next month.

Mr Rao said that action against BEST workers would not be taken by the BEST administration for the BEST bus strike.

The BEST workers’ union leader said that those who had got house eviction notices should frame it to show their children that they were part of the historic protest. Mr Rao claimed that attempts had been made to end the strike but since they were together, their fight had been successful.

Slamming the state government, he said that whatever was being given by the government was like a death warrant. “The government is expecting us to do what it wants. The drivers and conductors should work and not ask for a hike in their salaries. Thousands of new entrants will be hired on contract basis and we should agree to the same,” he said.