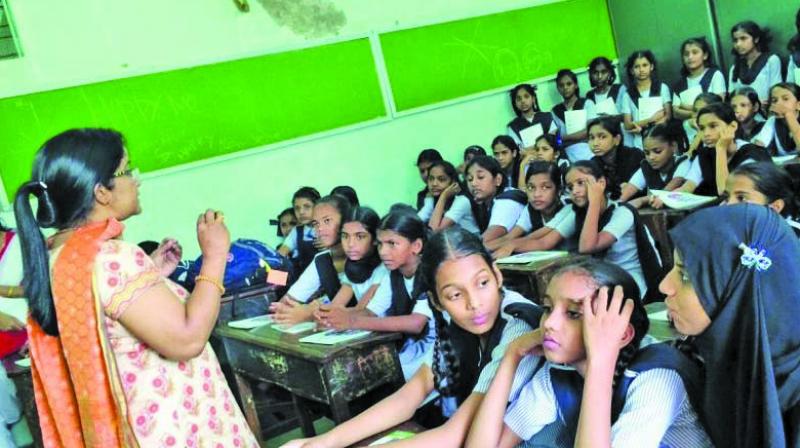 The report also says the number of students being enrolled in unrecognised schools has increased from 24,155 to 40,095.

Mumbai: Schools run by the Brihanmumbai Municipal Corporation will cater to ghosts in a decade or less if a report rele-ased by the Praja Foun-dation on Wednesday is to be believed.

The report — which sheds light on the shrinking number of students in such schools between the academic years 2013-14 and 2017-18 — states that while the number of civic schools has fallen from 1,266 to 1,192, that of students studying in them has plummeted from 4,01,367 to 2,97,076.  Moreover, 94 per cent of respondents to a survey conducted by the NGO across 24,290 Mumbai households said they wanted to shift their wards to private schools as they are ‘not satisfied’ with civic ones. The report also says the number of students being enrolled in unrecognised schools has increased from 24,155 to 40,095.

Stating that parents are looking for opportunities to enrol their children in private unaided schools or unrecognised schools, said Nitai Mehta, founder and trustee of Praja Foundation, said, “If the municipal corporation does not do something about the quality of education in civic schools, all their students will gradually leave for private schools.”

Also, most civic schools that existed in 2013-14 but have since shut shop are of the Marathi-medium variety. From 2008-09 to 2017-18, 229 schools were closed due to either lack of students or no enrolments or students being transferred to another school. Of these, 48.5 per cent were Marathi medium schools and 39.7 per cent were other mediums such as Gujarati, Telugu, Tamil and Kannada. Eng-lish-medium schools have, meanwhile, seen the highest number of enrolments, followed by Hindi and Urdu-medium schools. As of now, 53 schools have less than 20 students in total and wh-ile there were 311 schools with up to 100 students in 2013-14, the number stood at 426 in 2017-18 — a 37 per cent rise.

Meanwhile, the report had one silver lining: the BMC’s budget expenditure or the amount that is set aside solely for education every year — was increased by 36 per cent in the period in question. In 2013-14 the budget expenditure was `1,540 crore while in 2017-18 it was `2,094 crore. “The civic body is putting in more money for education, which is a good thing, but it should be channelised in a better way and it should be more accountable to get better results,” Mr Mehta said.

In the survey, the main reasons for dissatisfaction were lack of health check-ups and first aid, the absence of stationery and clean toilets, improper implementation of the mid-day meal scheme, lack of uniforms, absence of playground and blackboards and the dilapidated condition of school buildings.

Apart from these factors, the poor attendance of teachers, limited interaction, knowledge level, communication skills and command over subjects are some of the other reasons why the respondents were dissatisfied.

MPS-format schools faring better: Report
While the enrolment rate has decreased and dropout rates are on the rise in civic-run schools, the white paper by Praja Foundation says the performance of schools un-der the public-private partnership (PPP) scheme and the Mumbai public school (MPS) system is better.

As per the report, total enrolment in MPS schools which run under the full support of PPP scheme was 8,168 in 2017-18 while in 2015-16, it used to be 6,924. Similarly, the dropout rate in such schools last year was 135, which used to be 185 in 2015-16. NGOs like Aishabai Haji Abdul Latif Charitable Trust, Akanksha, Aseema, Educo, Muktangan, Te-ach For India and the Scholar’s Education Tr-ust, among others, are currently partnered wi-th BMC schools. The dro-pout rate in Akanksha was only 9 per cent in 2017-18 while Teach For India and Muktangan’s were 21 and 24, respectively.