I am happy to be here, says 11-year-old Moshe

The child, who was keen to exploring the surroundings of the five-storey building, peeped through glass windows in the neighbourhood. 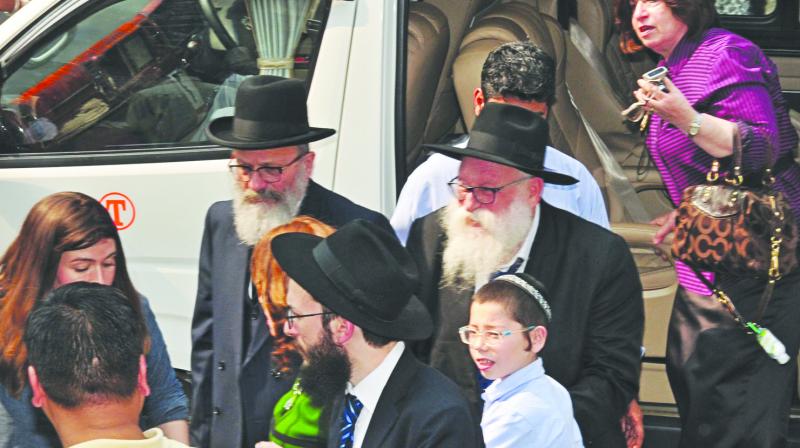 Mumbai: Nine years after the 26/11 attacks rocked Mumbai, Moshe Holtzberg — better known as Baby Moshe — returned to the city on Tuesday and visited south Mumbai’s Chabad House where 10 Pakistani terrorists had killed his parents, Rabbi Gavriel Holtzberg and Rivka Holtzberg. The Jewish couple ran a cultural and outreach centre for the Chabad-Lubavitch movement at the house.

Special arrangements were made for the 11-year-old at Chabad House, formerly known as Nariman House, where a memorial honouring the attack victims has been created. After Moshe arrival, the media tried to speak to him but, seemingly shy and confused at being the centre of attention, the boy only said, “shalom (a Hebrew word meaning peace that is used as a salutation by Jews), and then uttered two Hindi words, “Bahut khushi (I’m very happy).”

The boy was accompanied by his grandfather, Shimon Rosenberg and his Indian nanny, Sandra Samuel, who heroically picked up the then-two-year-old Moshe and ran from the building after had come under siege. The State of Israel granted Ms Samuel citizenship two years after the incident for her bravery.

Stating that he feels ‘very good in this country’, Mr Rosenberg said, “I feel very happy to come to India, to Nariman House where I am going to pray. I will greet the people of India.”

Moshe, who was first taken to the Taj Mahal Palace Hotel at Colaba — another site of the terror attack — was seen in photos chatting and laughing with Rabbi Israel Kozlovsky, who runs Chabad House. Special food and juices were prepared for the boy.

The child, who was keen to exploring the surroundings of the five-storey building, peeped through glass windows in the neighbourhood. He also visited a library and a prayer place.

Expressing joy, Rabbi Kozlovsky said, “Finally, Baby Moshe is at home. This visit is very emotional for him. He will see the living memorial project.”

The memorial will include the apartment where the Holtzbergs lived, as well as the sites where the killings occurred.  A portion of the fifth floor, will be kept as it is.