Bhima-Koregaon violence was conspiracy, he claims. 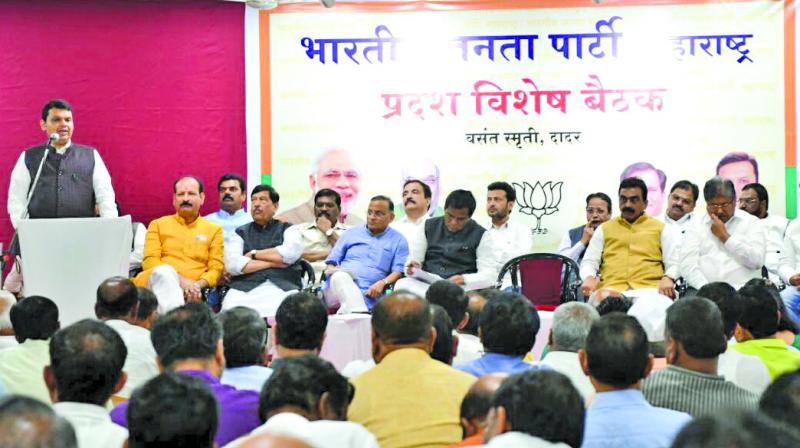 Mumbai: Chief minister Devendra Fadnavis expressed fear that caste-based tensions could again erupt in Maharashtra in the future. He also said that violence in Bhima Koregaon was a conspiracy to defame his government. While addressing Bharatiya Janata Party’s (BJP) state-level executive committee meeting on Tuesday, the CM asked the party cadre to be ready for a similar situation and not allow anti-social elements to spread hatred.

On Tuesday, state BJP held its first executive meeting in 2018. It was expected that party leaders would speak about the violence which marred the bicentenary celebrations of the Bhima-Koregaon battle in Pune on January 1. According to sources, Mr Fadnavis mentioned the incident and blamed it on ‘unknown’ anti-social elements who want to disturb the state’s ethos.

“Bhima Koregaon violence was a major conspiracy. The government has performed its duty to maintain law and order in the state but in future, there could be more such incidents to defame the government. BJP workers need to be more alert and shall work towards maintaining peace and harmony of the society,” said Mr Fadnavis, according to sources. He also appealed workers to unite under national flag if any such incident took place in future.

CM Fadnavis didn’t name any organisation or person for the violence at Bhima Koregaon. Echoing CM’s claims, the BJP state president Raosaheb Danave said, “Our development work has rattled a few people. They are behind the violence in Bhima Koregaon. But we will not cow down by such acts,” said Mr Danave.

Opposition parties are planning to hold a Samvidhan rally in Mumbai on January 26. Former JD(U) president Sharad Yadav, CPIM general secretary Sitaram Yechury, Gujarat Patidar agitation leader Hardik Patel, MP Raju Shetti and NCP leader, Sharad Pawar will march from Babasaheb Ambedkar statue near Mantralaya to Gate Of India. The BJP has decided to hold a counter rally and will organise Tiranga Yatra in every  district of state on the same day.