Fadnavis said that the Congress leader had made the comments because of his ignorance and should apologise to the nation. 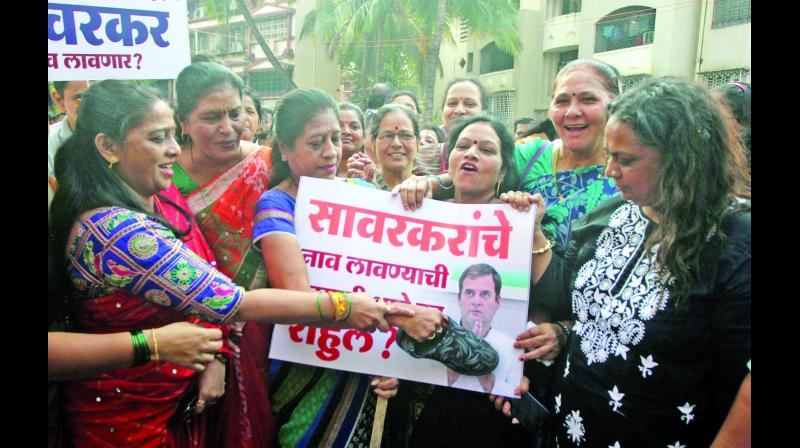 Nagpur: The Savarkar issue is likely to dominate the winter session of the Assembly, which starts on Monday in Nagpur. In order to corner the Shiv Sena, which is in an uneasy alliance with Congress and the Nationalist Congress Party (NCP), the Bharatiya Jan-ata Party (BJP) plans to raise the issue in the House and seek an apology from Congress leader Rahul Gandhi for his “I am not Rahul Savarkar, I will not apologise” comment. However, its real target will be the Sena. The ruling parties are confident that the Savarkar issue will not be effective.

Leader of Opposition in the legislative Assembly, Devendra Fadnavis on Sunday said the Oppos-ition would move a resolution in the House to condemn remarks of Mr Gandhi against Savarkar.

“Mr Gandhi’s remarks have sparked country-wide protests. People will not keep quiet. Savarkar’s sacrifices in the freedom struggle are unparalleled. He was the only person who was sentenced to jail for a double life term. He spent more than 12 years in solitary confinement in the cellular jail in the Andamans. He became the inspiration for several revolutionaries in India’s freedom struggle,” Mr Fadnavis said.

Addressing the Con-gress’ mega ‘Bharat Bachao Rally’ in Delhi on Saturday, Mr Gandhi had rejected the BJP’s demand for apolology over his “rape in India” barb, and added that his name was Rahul Gandhi, not “Rahul Savarkar”, and he would never apologise “for speaking the truth”.

Mr Fadnavis said that the Congress leader had made the comments because of his ignorance and should apologise to the nation. He also criticised the Sena for maintaining its alliance with the Congress despite Mr Gandhi’s remarks against the ideologue.

Referring to Sena leader Sanjay Raut’s statement that the Congress should respect Savarkar, the former chief minister said, “The Shiv Sena has become so helpless that it is seeking Congress’ respect for Savarkar in bargain for Mahatma Gandhi and Jawaharlal Nehru. Both of them were great leaders of India and they must be respected. But we do not  want respect for Savarkar in exchange of respect for Gandhi and Nehru. Savarkar is, was, and will always remain one of the tallest leaders of India and he must be respected by all without any conditions.”

Another issue on which the BJP is planning to corner the Thackeray government is agrarian distress. Mr Fadnavis said the chief minister had had himself demanded Rs 25,000 per hectare relief and, therefore, it is the responsibility of the government to fulfil what they had promised.