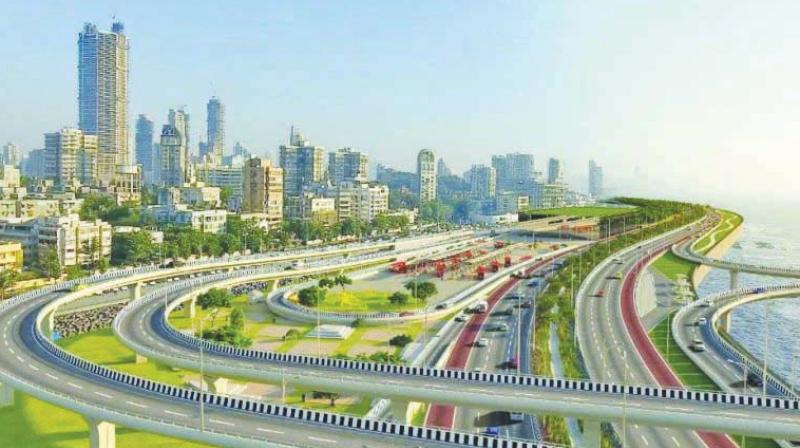 Artist’s impression of the coastal road.

Mumbai: The bhoomi pujan ceremony of the Mumbai coastal road project will be an all Shiv Sena affair as no major BJP leader has been invited to the event by the Brihanmumbai Municipal Corporation (BMC).

The move is seen as a strong riposte by the Sena to the alleged snub by the BJP-led state government, which has not invited Sena chief Uddhav Thackeray to the Kalyan bhoomi pujan of the metro projects.

The BMC has organised a bhoomi pujan ceremony at Amarsons Garden, Cumballa Hill, Bhulabhai Desai Road, on Sunday. The bhoomi pujan will be done at the hands of Mr Thackeray in the presence of his son Aditya and BMC mayor Vishwanath Mahadeshwar.

Senior Sena leaders like industries minister Subhash Desai and environment minister Ramdas Kadam will also be present on the occasion. However, top BJP leaders will be conspicuous by their absence at the event. The names of only two BJP leaders – local MLA Mangal Prabhat Lodha and civic group leader Manoj Kotak – feature in the BMC’s list of invitees for the occasion.

According to sources, the Sena is miffed over the fact that Mr Thackeray hasn’t been invited to the bhoomi pujan ceremony of the metro projects in Kalyan which will be carried out in the presence of Prime Minister Narendra Modi on December 18.

The bhoomi pujan of two new metro projects will be held in Kalyan.

However, a senior Sena corporator denied that the Sena was annoyed over the metro snub.

“The coastal road project is an all out BMC event. So, there is no question of inviting other leaders to it. All major leaders of the BMC, including party group leaders, have been invited to the bhoomi pujan ceremony,” he said.