V-P tells students to not forget their mother country

The MU organised a memorial lecture on the same at its Fort campus. 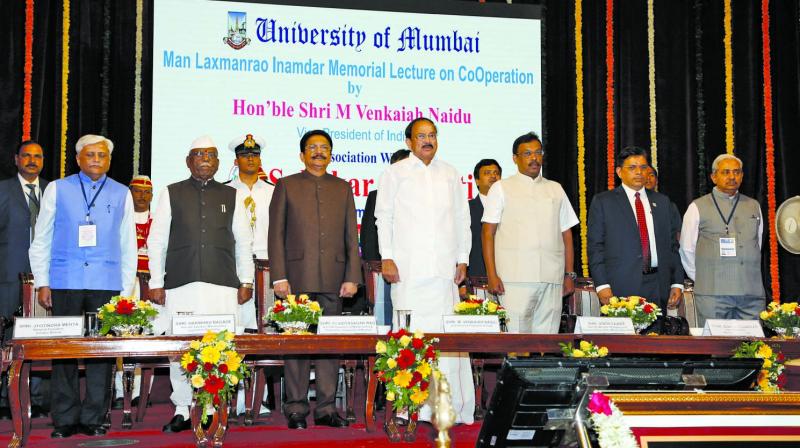 V-P Venkaiah Naidu and other dignitaries.

MUMBAI: Observing the birth centenary year of Laxmanrao Inamdar, the Mumbai University (MU) welcomed Venkaiah Naidu, Vice-President of India, who, while talking to the youth, encouraged them to strengthen the cooperative movement.

The MU organised a memorial lecture on the same at its Fort campus Thursday where Mr Naidu advised the students not to forget their Indian roots, traditions and culture no matter where they went abroad for studies and job opportunities.

According to him, the cooperative movement, which was started by soc-ial activist Inamdar in the year 1979, needed the full involvement of women and youth to make it a success.

“Women are an integral part of our society and they can bring major changes. For the cooperative movement to be successful, we would need structural changes, infrastructural support, credit system, financial aid and better facilities for the farmers. To deliver the benefits of the schemes, launched by the central government, cooperative societies should bridge the gap between the government and farmers,” said Mr Naidu.

According to him, with active participation of the cooperative sector, the programmes for farmers including the Pradhan Mantri Fasal Bima Yojana, Krishi Sinchai Yojana, Mudra Yojana etc. could benefit highly.

Urging students to study or work abroad if they wanted but not forget their motherland, India, Mr Naidu said, “You should learn and earn abroad if you want to but return back and do something for your nation. Because it is your nation, too.”